NORWAY – Norwegian researchers recently published a report of polar bears eating away at the carcasses of white-beaked dolphins at Raudfjorden, a coast of Spitsbergen – the largest island of the Svalbard archipelago in Norway.

Scientists had never really observed polar bears devouring dolphins in the wild since seals appear to be their staple food, but since climate change appears to be causing a dwindling in the habitats occupied by polar bears as well as causing white-beaked dolphins to swim up north to the area, polar bears had taken advantage of the new source of food to survive rather than stick to seals. 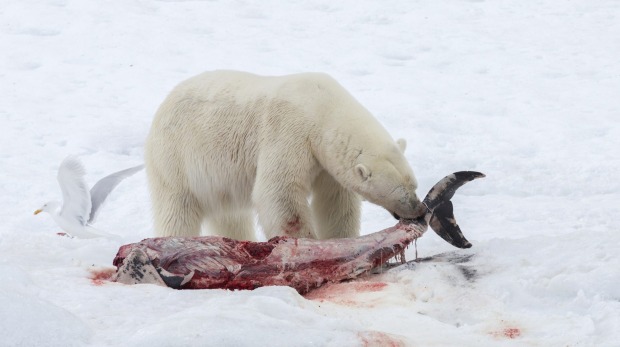 The researchers on April 23, 2014 saw a polar bear consuming a dolphin that appeared trapped in ice, and then covering up a second with snow to keep it from other scavengers for later consumption. The first dolphin carcass was almost finished but the second remained largely intact and covered up with snow for later.

The scientists found the idea of covering up the second dolphin with snow for a later meal interesting, and they regarded it as a “caching behavior” which is not too common with polar bears because they usually finish up their kill in a single day to prevent predators from sharing their meals. 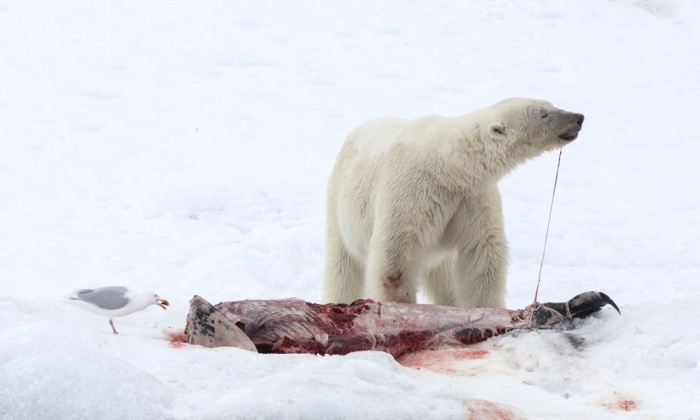 According to the researchers, white-beaked dolphins usually come to Svalbard during summer but not up this far north in early spring; meaning that the dolphins were trapped in ice following a strong northerly wind that blew the days before.

The two dead dolphins were not the only ones seen in the area the following summer and fall, seven others were observed and they were all dead; with six different polar bears observed to be dining on their remains.