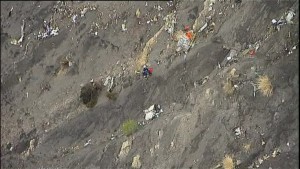 According to investigators, there are indications that the co-pilot of a Germanwings plane that went down in France deliberately crashed the aircraft. The initial discoveries in the investigation have indicated that the crash was no accident. The plane went down in the French Alps on Tuesday. When the aircraft slammed into the ground, all 150 people on board were instantly killed. The recovered bodies of the Germanwings crash victims will not be released until all DNA identification work has been completed.

Information collected by investigators suggests that the captain of the flight was locked out of cockpit while the co-pilot was in control of the plane. The co-pilot, 28-year-old German national Andreas Lubitz, apparently took advantage of a moment in which the pilot left the cockpit to lock the pilot out and assume full control of the aircraft. It is not yet known whether the co-pilot planned his actions in advance. Officials at Lufthansa, the company that owned the Germanwings plane, are “speechless that this aircraft has been deliberately crashed by the co-pilot,” according to CEO Carsten Spohr.

The mangled cockpit voice recorder provided a chilling picture of the plane’s final minutes before the crash. While alone in the cockpit, the co-pilot used the button that activated the descent of the plane, an action that could only have been done deliberately. The audio recording showed the co-pilot’s breathing to be steady and there was no sign that he had a heart attack or other medical issue. In the last few minutes before the plane went down, screaming could be heard on the recording.

Until more is known, the horrific event will not be labeled as a terrorist attack, but it is apparent to investigators that the co-pilot wanted to completely destroy the aircraft. According to reports, Lubitz was not known to be on any terrorism list and his religion was not immediately known. The co-pilot had all the necessary certifications and qualifications to pilot the aircraft alone and had about 100 hours of experience on the type of aircraft he was flying. The co-pilot had been employed by Germanwings since September 2013 and had completed 630 hours of flight time.