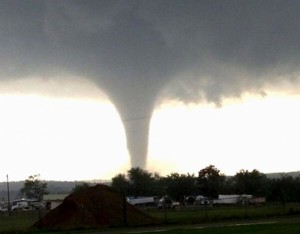 The nation’s tornado season started in earnest on Wednesday as dangerous tornadoes tore through Oklahoma and Arkansas. The strong tornadoes ripped through the city of Tulsa during its evening rush hour, injuring multiple people and killing one.

The fatality occurred in a mobile home park near suburban Sand Springs that was nearly destroyed by the severe weather, according to Tulsa County Sheriff’s Capt. Billy McKelvey. Multiple injuries were reported at the mobile home park, which was said to accommodate 40 to 50 trailers, but the exact number of injuries have not yet been released.

Tornadoes were seen elsewhere in Oklahoma, as well as in Arkansas, but no injuries were reported from those. A small tornado swept across parts of Oklahoma City suburb Moore while a line of additional tornadoes swept from southwest of Oklahoma City to east of Tulsa. Tornadoes were also reported to have touched down in the Ozark Mountains of northwestern Arkansas.

Until last Tuesday, the U.S. hadn’t had a tornado in more than a month. Less than 30 tornadoes have been recorded this year during a period when the number is usually around 120. According to figures from the Storm Prediction Center in Norman, Oklahoma, the last time the U.S. had no twisters in March was nearly 50 years ago.

While tornado season usually intensifies in March for parts of the U.S., cold air throughout most of the country this month has reduced the warm, moist air necessary to form the storms that spiral into tornadoes. This week, winds brought warm air that rose temperatures across the Ozarks and Southern Plains into the 70s and 80s, providing the right conditions for the violent storms.

In the Oklahoma City area, 27,000 homes and businesses were without power, according to initial reports from electric companies in the area. In Tulsa County, roughly 28,500 homes had lost power. Television video of a Moore neighborhood showed extensive roof damage.

The building that houses the National Weather Service office in Tulsa had a glass door smashed and damage occurred to several vehicles in the parking lot. The Oklahoma Highway Patrol reported that an overturned tractor-trailer had disrupted traffic in both directions on Interstate 35, a major north-south route for the state.