Professor Marcio Pie of the Universidade Federal do Parana published a report announcing the discovery of the frog species, which took his team five years to discover in the cloud forests of Brazil. The report explains that the maximum adult length of the frogs is a mere 13 millimeters. Also, the species has evolved with fewer fingers and toes due to their reduced size.

The small size of the frogs makes it difficult for them to travel long distances, which forces interbreeding and leads to the creation of a distinct species separate from frogs that are in close proximity, but too far for the tiny creatures to traverse. The lack of mobility of these tiny frogs also makes them more susceptible to climate change and other environmental threats that that may threaten their existence. 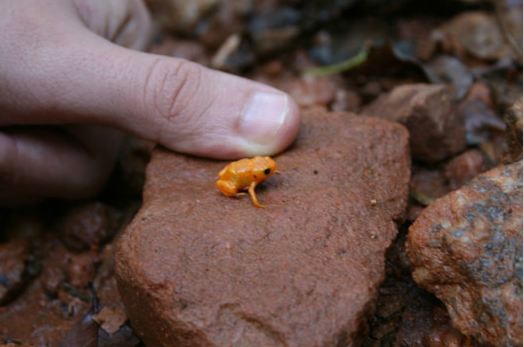 Amphibian experts are obviously excited by the discovery of these new species, as most experts believe that there are a significant number of species that become extinct before they can be discovered.

Amphibians are facing a global decline in population due to deforestation and other forms of human infringement on their habitat. The seven new species of tiny frogs are already believed to be in danger of extinction due to global climate change and the threat that humans pose on their habitat.

On a larger scale, the discovery of these new species of frogs says a lot about the possibility of other species that may exist but remain undiscovered. As Pie put it, “Such high success in uncovering new species might indicate that the total number of Brachycephalus is still underestimated.”

One thought on “Seven Tiny Frog Species as small as 0.4 inch Discovered in Brazilian Rainforest”