Home » Headlines » Editorials » The Important History of Guns in America

The Important History of Guns in America

Guns have played an important role in the politics and culture of the USA. Learn how and why with this guide to the history of guns in America. 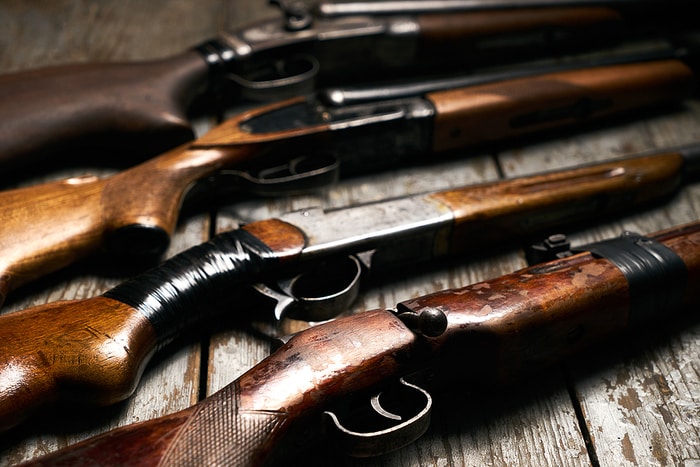 In this day and age, guns are a highly controversial topic.

As it still stands, the US is the only major country that doesn’t put severe limitations on gun ownership. A series of mass murders have cast a shadow of doubt over this state of affairs.

People across the political spectrum are clashing spears and trying to prove conflicting points.

So, it’s worth taking a step back and opening the dusty chest called the history of guns in America. Inside, we can find images of patriots firing on redcoats and cowboys chasing buffalo. And that’s just the tip of the pile.

Let’s dig deeper and extract nuggets of knowledge and pieces of American culture buried beneath.

Gunpowder was invented long before the US arrived at the great stage of history.

Yet, in a few other places have guns become so engrained in culture as in our country. Why is this the case? Well, let’s start with the first chapter of modern American history.

For early pilgrims and colonists, guns were essential tools for survival. These people were a long way from home, and North America was teeming with hostile tribes.

In this period (15th century), the firearm design was a far cry from the clunky and unreliable guns that emerged in the Middle Ages. There was hardly a better weapon than a musket to get you out of any dicey situation.

One of the most commonly used guns was German-made blunderbuss. You can think of it as a crude predecessor of modern shotguns. The design featured a broad top opening and a flared muzzle.

Another weapon essential to colonist endeavors was a matchlock musket. As the name suggests, it entailed the use of a match to ignite the gunpowder. This match was essentially a small piece of rope.

Not overly elegant, is it?

The Inception of American Gunsmiths

Versed in the way of metal manufacturing, they developed the fabled American long rifle.  This weapon is also referred to as a Kentucky, Ohio, or Pennsylvania Rifle.

Its defining trait was an extended barrel with twisting groves that guided the projectiles. The result of this innovation was remarkable.

Namely, the long rifle made the arc of the shot straighter. This is tied to another advantage—better and easier aim for those wielding the gun.

This novelty was nothing short of a real game-changer. Settlers gained better protection and were able to hunt wild animals more efficiently.

Notice that some rifles were intricately carved and decorated. Gunsmiths would apply these artistic touches to brass and silver plates. So, the guns were not only deadly but served as lifestyle centerpieces.

The next chapter in the saga is the Revolutionary War.

This was when rifles were put to use in various conflicts with British armed forces. It all started with small skirmishes and guerilla tactics. American militias sought to catch better-armed and trained soldiers off guard.

After the initial stages of the fighting, new guns were called for by the continental militia. These were British Brown Bess and French Charleville, both smoothbore muskets.

While they lacked the accuracy of a long rifle, they had one great advantage. We’re talking about faster reload time. Soldiers could get in an extra volley or two and then retreat to safety.

We also need to highlight the demand for guns went through the roof during the War. Gunsmiths were working tirelessly to equip militias, and they started manufacturing American versions of European muskets.

To operate these smoothbore muskets, one initially had to strike a piece of flint against a metal plate or pan. This would cause a spark and ignite the gunpowder.

Well-trained soldiers were able to fire the weapon around three times per minute.

Advancing by Leaps and Bounds

Consequently, he ordered the building of a Springfield Armory in Massachusetts in 1776. At first, this establishment was used to store ammunition. But, in the 1790s, it became a factory for cranking out muskets and other guns.

And when the revolutionary dust and smoke settled, the efforts to boost the arsenal didn’t falter. In 1798, Congress decreed the establishment of the Harpers Ferry Armory in West Virginia.

Furthermore, the US Government devised its own grand strategy. It revolved around smaller outfits making guns and parts, based on the blueprints of official, armory-grade weapons.

Eliphalet Remington was among this new wave of gun makers.

He developed the first flintlock rifle in 1816. The company he founded operated with considerable success until recent years (it filed for bankruptcy in 2018).

Henry Derringer also got his start around this time. He focused on flintlock rifles and produced them for the Government in large numbers. Over time though, his business moved toward a small handgun market.

Revolver Arrives With a Bang

One of the most iconic brands in the whole history of guns in the US is Colt 45.

Samuel Colt had a blueprint for it ready in 1836. What he envisioned was groundbreaking—a multi-firing system with a lock and spring design. The gun was capable of firing more bullets thanks to the rotating barrel with six chambers.

Metal parts came from the armory in Hartford, Connecticut. This facility could produce weapons on a mass scale. That is why Colt .45 rounds were carried not only by military officers, but cowboys and Gold Rush miners as well.

This weapon earned a tile of the “gun that won the West.” It certainly had a huge role to play in Westward expansion, but Winchester repeater rifle has a strong claim too.

Until the patent expired (the mid-1850s), Colt dominated the revolver market. Then, Remington, Starr, Whitney, and Manhattan started chipping away at Colt’s share of the pie.

Their revolver-based weapons bring us to the doorsteps of the Civil War.

Civil War and the Industrial Revolution

Civil War was a catalyst for the rapid growth and evolution of the arms market.

This historical process was interwoven with the Industrial Revolution. The combination of these two events ushered in a new era in gun making.

Both Union and Confederacy used the same weapons we covered in the previous section. One new rising star on the horizon was Smith and Wesson. This company’s revolver was faster to reload and recharge.

Likewise, Spenser Gun was another go-to army gun. It gave soldiers a chance to unleash the fury of repeat fire onto enemy lines. This ability stemmed from several cartridges that sat at the rear end of the gun.

Benjamin Henry realized the potential of this solution as well and patented a similar model. It later became the inspiration for the classic Winchester Rifle.

Naturally, Colt couldn’t sit idle and let others steal his thunder. Before the end of the century, the company rolled in a new product. It involved a “double-action” design, meaning users could reload by swinging barrel to either side.

Along the way, other modifications deserve mention.

Take the example of one solution to the problem that plagued older weapons. Flintlock muskets were quite ineffective in wet weather, which dramatically increased misfire chances.

The solution came in the form of a new, percussion ignition system. A small copper cap shielded the gunpowder from the elements. Soldiers needed to insert this cap into the rear part of the barrel.

Moving on, we want to highlight breech-loading systems. They allowed users to load guns from the rear, not gun’s muzzle end. What is more, these systems used new projectiles that packed everything in one combustible cartridge.

These practical improvements saved time and improved US military prowess. Subsequent decades brought other notable innovations to the fore.

Some improved reload time further. Others focused on increasing firepower, adding multiple barrels onto one stock. That’s how we got double-barrel shotguns, which still exist today.

The Dawn of the Automatic Era

Finally, we can’t possibly leave John Moses Browning out of the story.

He secured his place in history by creating a pump-action rifle. It enabled people to eject empty shells and reload the weapon quickly.

For instance, the US military quickly embraced M2 and made slight modifications. This new gun was the sustenance of solider life in World War II and the Vietnam War.

Similarly, M1991 became the first semi-automatic military handgun. Various versions of it also popped up on in law enforcement and sport shooting.

BAR was equally or even more famous. That has a lot to do with Bonny and Clyde using it to unleash hell around them. Thomson gun earned infamy a bit earlier, as a fully-automatic firearm adored by gangsters.

These are the guns that defined the bygone eras, and the sounds of their shots still echo. Today, we have many new players, such as Strike Industries, leading the charge forward.

The History of Guns in America Is Worth Retelling

The history of guns in America is quite a fascinating topic.

It sheds light on how various ambitions, political interests, historical processes, and technological innovations coalesced. Ultimately, it speaks volumes about the development of our nation and informs our present situation.

Most of us would even struggle to separate guns from ideas of individual and collective freedom and democracy. And that says something.

Don’t hesitate to browse our courses and learn a lot more about US history.