A new study is advising anyone who wears a cardiac device to keep their distance from smartphones. Patients with pacemakers or implantable cardioverter defibrillators (ICDs) who carry a smartphone are at risk to experience painful shocks or sudden pauses in the function of their cardiac device.

Lead author of the study Dr. Carsten Lennerz says, “Pacemakers can mistakenly detect electromagnetic interference (EMI) from smartphones as a cardiac signal, causing them to briefly stop working.” This results in a pause in the cardiac rhythm of the patient. Lennerz adds, “For ICDs the external signal mimics a life threatening ventricular tachyarrhythmia, leading the ICD to deliver a painful shock.” 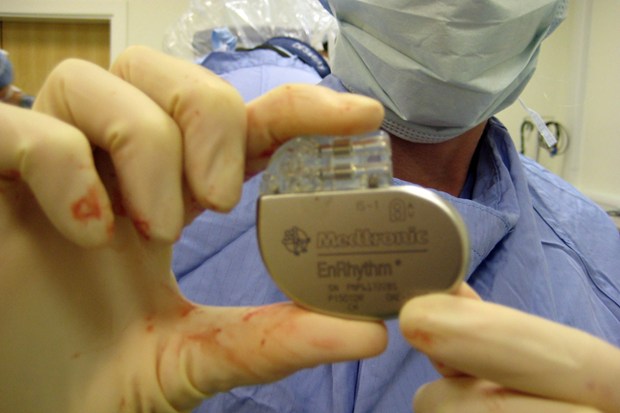 The syncope that smartphones may cause for those with cardiac devices can cause a drop in blood pressure that leads to a temporary loss of consciousness.

More than 10 years ago, the FDA recommended a distance of at least 15 to 20 centimeters should be between mobile devices and a person’s pacemaker or ICD. For the study, researchers used more than 300 patients to test whether that recommended safety distance was still applicable to the smartphones that did not exist 10 years ago but have become commonplace in our society over the last decade.

The study patients were exposed to EMI from three different smartphones: the Samsung Galaxy 3, Nokia Lumia, and HTC One XL. Only one of the study participants was affected by the EMI emanating from the smartphones, meaning negative affects were present in less than 1% of subjects.

However, Lennerz concluded that interference between smartphones and cardiac devices is possible, even if it’s uncommon. He says that “current recommendations on keeping a safe distance should be upheld,” meaning anyone who uses a pacemaker or ICD should continue to keep a safe distance from smartphones or any other kind of mobile device.