A new research details how an Indian scientist together with others designed a placenta-on-a-chip device to enable them understand what the placenta actually does in pregnancy development, and to apply this knowledge to other aspects of human medical needs.

On a micro scale, the little apparatus works just like a placenta in maintaining pregnancies by transferring essential nutrients between mother and fetus, with Roberto Romero of Wayne State University saying the device would provide answers to certain unknown things about existing placenta models, and further knowledge in pregnancy researches. 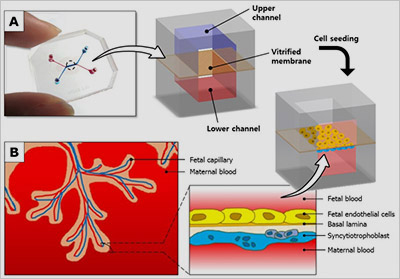 The placenta-on-a-chip device is designed for multiple uses, and it may later be used instead of animal models which are currently utilized in medical researchers, lowering the cost of placental research.

Although scientists are still trying to fully understand how human placenta works, they already know it facilitates the movement of oxygen and nutrients between mother and fetus, and that it also helps the fetus to get rid of waste products. And then, the placenta also tries to block bacteria, viruses, and some harmful drugs from reaching the unborn baby.

The researchers believe this knowledge would help them to evaluate placenta health and help bring pregnancies to full term without any complications.

The device has two channels with a thin membrane consisting extracellular matrix at the middle; meanwhile, fetal endothelial cells and maternal cells are seeded in one part of the membrane and in the other side respectively.

Since clinical trials have shown that the placenta-on-a-chip device mirrors what actually happens in a mother’s body, it is estimated that it would be helpful for testing new drugs as well as evaluating physiology or biology concerns.

Published in the Journal of Maternal-Foetal and Neonatal Medicine.