Greece is virtually on the way to default in its debts if a deal for more bailout funds in return for tougher fiscal reforms will not be reached. The Greek government closed all banks for six days and imposed limits on withdrawals.

Greek citizens were greeted on Monday with closed banks and a closed stock market in a week which will determine Greece future in the Eurozone. European markets tumbled after Greek PM ordered a referendum to decide whether to accept the tough economic austerity measures demanded by IMF and other lending agency in return for further bailout funds. 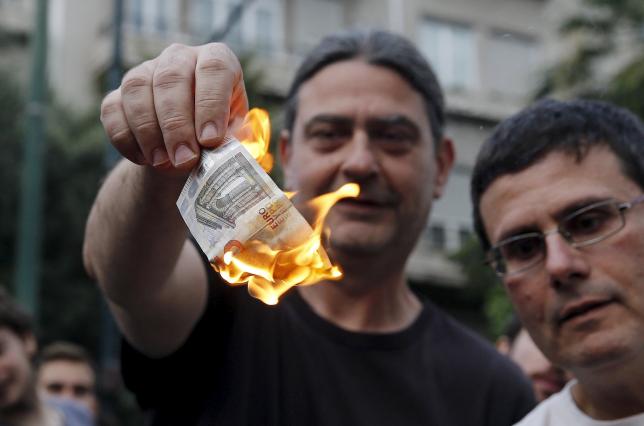 The international bailout is set to expire on Tuesday, and the closure of banks and limits of ATM withdrawal were seen as a last ditch effort to stem bank failures.

Meanwhile Greece’s creditors and donors continue to discuss if there is a way out to pull back Greece from the economic disaster. However, there are concerns that Greece’s painful austerity measures for the last five years to remain in the 19 nations Eurozone has come to naught and the shocks are already reverberating across Global markets.

No nation within the Eurozone has quit the shared currency zone. EU leaders are saying that they are prepared for the consequences of Greece leaving the European Union. However, European has fallen sharply, and the same is expected to happen when the US markets open later today.

Earlier Greek extreme left wing PM, Alexis Tsipras stunned the world by announcing a referendum about whether the nation should toe the line of its lenders and enforce tougher austerity measures in return for more bailout funds. Tsipras’ himself is advocating, and no vote and his left wing party, the Syriza party plans a huge rally of anti-austerity supporters in front of the country’s parliament on Athens’ Syntagma Square on Monday.