The skin condition psoriasis can be an embarrassing and annoying disease for those who suffer from it, as it causes people to develop thick, red skin with flaky patches that can be quite itchy. But a new drug is giving those who live with the condition hope.

A study conducted by the University of Manchester in Britain tested the drug ixekizumab with exceptional results. Details of the study were published in The Lancet Journal, showing that after 12 weeks of treatment with ixekizumab, 40% of patients were completely clear of psoriasis plaques, while over 90% showed some kind of improvement. Roughly 2,500 patients took part in the study, and were given the drug either every two weeks or every four weeks.

Based on a scale called the Psoriasis Area and Severity Index, 50% of study participants began to show improvement as early as four weeks in the 12-week trial. By the final week of the trial, 71% had shown significant improvement. 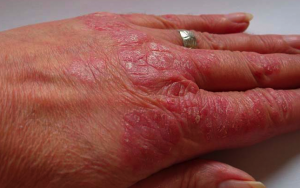 The lead researcher on the study, Chris Griffiths, who is a professor of dermatology at the University of Manchester, said that not only were the physical effects of psoriasis improved during the study, “but people on the new drug also reporting a marked improvement in their quality of life as they felt more confident and suffered less from itching.”

Griffiths notes that psoriasis can have a psychological stigma on sufferers, a “life-ruining impact on people’s confidence and self-esteem,” as he put it.

It’s common for people with psoriasis to simply manage their symptoms as best they can. However, Griffiths says that new drugs like ixekizumab are giving patients hope that the condition can actually be cleared up and cured, adding, “this trial very much sets us on that path.”