Zoe Roth, a 21-year-old girl whose photo as a 4-year-old child has taken the internet as a meme storm has earned $500,000 from the sale of the photo. The photo which has come to be known as the “Disaster Girl” shows Zoe grinning at a camera in front of a burning house. 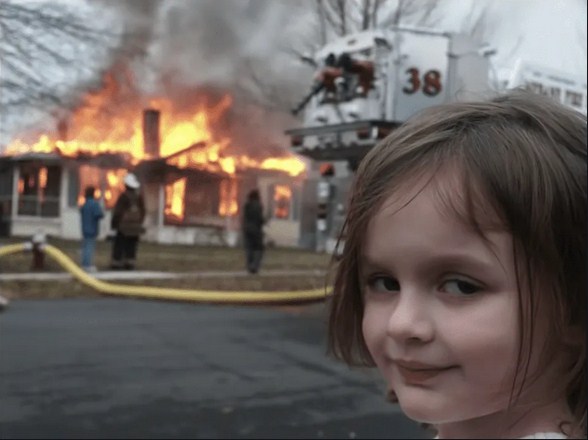 Although the meme has gained notoriety worldwide, and it has been modified several times to portray suffering and disaster, no one knows the name of the 4-year-old girl in the photo until the recent auctioning that fetched half a million dollars.

As it happened, firefighters had deliberately set the house on fire as part of a firefighting training exercise in the neighborhood in 2005. Zoe’s father, Dave Roth, asked his daughter to stand in a way that put the burning house in the background and then photographed her. While most people around the world did not know that the scene was staged, they took the photo out of context and edited it in several ways to depict disasters and sufferings under various circumstances, ABC11 reports.

“People who are in memes and go viral is one thing, but just the way the internet has held on to my picture and kept it viral, kept it relevant, is so crazy to me,” Zoe said. “I’m super grateful for the entire experience.”

Now a senior at the University of North Carolina at Chapel Hill and studying peace, war, and defense, Zoe was glad when she heard of the NFT – a non-fungible token – a blockchain auction system where digital assets such as memes and arts are sold. Zoe and her dad entered the auction with the original photo of the Disaster Girl and the meme sold for 180 Ether (a cryptocurrency) which translates to $495,000.

The successful buyer was identified as @3FMusic. The Roths are keeping the copyright to the meme, and they will be receiving 10% of any future sales. As it stands, the Disaster Girl meme now equals “Ermahgerd,” “Bad Luck Brian,” and “Success Kid” among other memes in terms of world fame and revenue.

Zoe said that although many people in her school did not know that she’s the famous Disaster Girl now grown, she said she plans to use her $500,000 to clear off her student loans, donate to charity, and take care of other personal things. She said she still walks past the scene where the building was set ablaze years ago and where the photo was taken, and wonders if people ever knew that the Disaster Girl meme originated from the place.

Volkswagen Is In Trouble with SEC Over a Volkswagen Prank That Went All Wrong < Previous
Rep. Mike Nearman Charged With Criminal Misconduct for Allowing Protesters into Oregon Capitol Next >