Protests in Jakarta, Indonesian’s capital city, turned violent on Thursday, following demonstrations against a newly passed labor legislation which students and civil servants said is detrimental to worker’s rights and the environment. 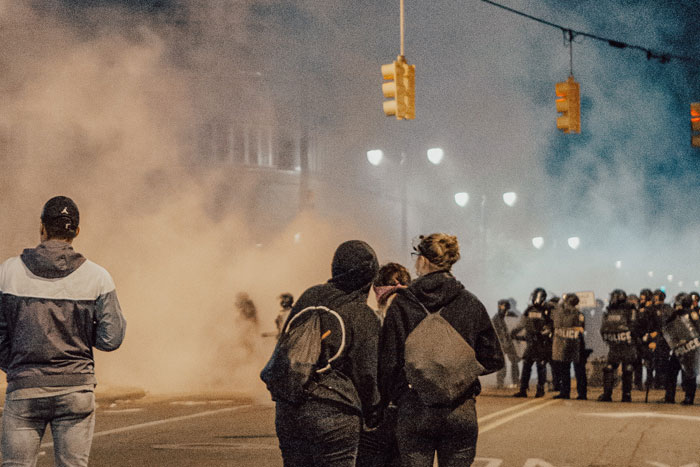 Thousands of protesters took to the streets to protest the controversial law, otherwise called the “omnibus law,” which they feared will cause job losses rather than create them.

The demonstrators clashed with riot police who were summoned to several locations across the city to restore normalcy. As the protesters went violent, the police used tear gas and water cannon to disperse them in an attempt to restore peace. The protesters responded in kind by shouting, throwing stones, breaking into public buildings, and setting a fire near the presidential palace, thereby destroying properties in the process.

Demonstrators stated they are taking these steps because the government was not ready to listen to them. It cited a situation where organized labor was not consulted before the legislation was hurriedly signed into law by the president.

The omnibus law was signed into law on October 5. The legislation witnessed strong opposition from labor unions in the country when it was first proposed. The government said the law was proposed to drive the influx of foreign direct investment into the country, simplify the country’s legal system, and generally lead to an economic boom.

However, workers refused to be enticed by the ostensible reasons given by the government for proposing the law. They said the law was exploitative to workers and could potentially destroy the environment.

Reacting to the new legislation, the head of Amnesty Indonesia, Usman Hamid, said that the new law laid the ground for multinational corporations to extract the country’s natural resources without hindrance and recourse to the people.

At least 60 protesters and six policemen have been injured in the fracas. The Indonesian Red Cross reported acute cases of respiratory difficulties by some protesters after riot police threw tear gas at the protesters.

Observers have criticized the excessive use of force by the demonstrators. Footage released on social media saw some demonstrators hurling stones at the police, launching Molotov cocktails, setting fires to tires, bus stops, and even trying to gain forceful entrance to the presidential palace. President Joko Widodo was not in the palace since he was visiting Central Kalimantan province.

However, Hamid said the police were the aggressors. He argued that their use of tear gas and assaulting of protesters made the crowd react violently.

Indonesia’s security minister Mohammad Mahfud in a press conference late Thursday said the government would not tolerate the violent behavior of protesters who went about causing wanton damages to public properties.

Meanwhile, the Jakarta Metropolitan Police spokesman, Yusri Yunus, confirmed that over 400 suspects were arrested during the protests.

The Top Five Roulette Tips that Can Increase Your Profits < Previous
Does Incognito Browsing Make Online Betting Safe? Next >