Home » Headlines » U.S. » US Govt to Pay Families of 10 Civilians Killed By Drone Strike in Afghanistan

The US government has agreed to pay financial compensations to the families of 10 civilians killed by drones in Afghanistan. In a virtual meeting of key Department of Defense officials, the government said the reparation may include relocating the families to the United States. The government said seven children also lost their lives in the botched August 29 drone strike. 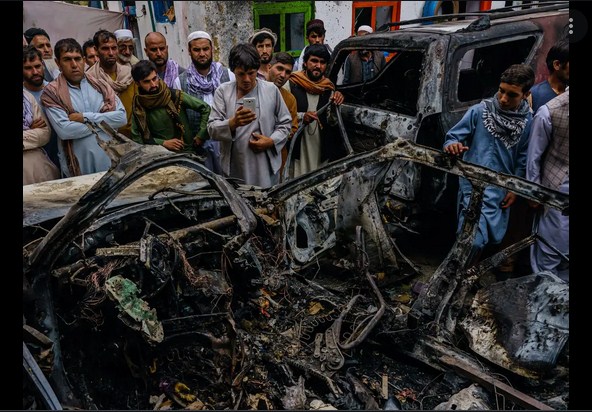 According to the Pentagon, the drone strike which was targeted at ISIS terrorists was a mistake, since it inadvertently killed innocent civilians. The government had earlier hailed the strike as a success, but following investigations by the New York Times, the DOD changed course to consent that it was a failure given that innocent lives were destroyed.

One of the key persons killed was Zemari Ahmadi, an electrical engineer and driver working with Nutrition and Education International (NEI). According to the founder and president of NEI, Steven Kwon, Ahmadi was driving a white Toyota sedan that US authorities in Afghanistan mistook for a terrorist vehicle going to bomb the Hamid Karzai International Airport.

ISIS-K terrorists had attacked the airport three days earlier and killed 170 people, including 13 US troops. The authorities thought the sedan was headed to bomb the airport again based on local intelligence, so they hit it hard – little knowing it was occupied by civilians. The attack took the lives of children who were playing in the residential Kabul neighborhood.

“Dr. Kahl noted that the strike was a tragic mistake and that Mr. Zemari Ahmadi and others who were killed were innocent victims who bore no blame and we’re not affiliated with ISIS-K or threats to US forces,” said John F. Kirby.

The American Civil Liberties Union (ACLU) which is representing NEI, said nothing can bring back the people who lost their lives in the unfortunate drone attack, but the government can help their families to rebuild their lives again. Kwon also repeated the same thing in lamenting the loss of Ahmadi and others.

“Nothing can bring Zemari or these other precious people back, but we appreciate the opportunity to discuss these devastating losses in detail with senior Defense Department officials,” Dr. Kwon said. “We hope they will act urgently to get surviving family members and impacted NEI employees to safety and to help them to rebuild their lives.”