After tanker fire, two lanes of I-75 reopened

Detroit- A tanker caught fire at 05:00 a.m. Friday on southbound I-75 on the Rouge River Bridge. Authorities reported that the fire was extinguished, and there were no injuries. The southbound I-75 was expected to be closed all Friday due to median damages, but two lanes were reopened.

The fire started at 05:00 a.m. Friday at the midpoint of the Rouge River Bridge located at I-75 in southwest Detroit. The driver was able to escape without injury. Thankfully, the tanker was empty, and the flames could be extinguished moments after it started. By 07:00 a.m there was no fire.

Diane Cross, a Michigan Department of Transportation (MDOT) spokesperson said southbound I-75 was expected to be closed for the rest of the day. Northbound I-75 was also closed while the tanker was on fire but reopened before 07:00 a.m. after a crew put out the flames.

I-75 could not be opened even where there was any imminent danger according to Cross because the situation needed careful assessment. Officials were not sure what kind of substance was inside the container and how did start the fire.

People on the scene discovered the tanker was empty and Detroit police officials are investigating the cause of the fire. According to the Morning Ledger, there was no indication that the truck was carrying flammable chemicals since it was empty. Thus, they are looking at engine malfunction as the cause that ignited the tanker.

By 09:30 a.m. crews removed the burnt vehicle from the freeway, but the I-75 remained close waiting on engineers to assess the road. Cross explain that because the fire was a HAZMAT (Hazardous Material) situation, authorities need to give the green light and make sure the route is safe for travelers. Materials may be getting into the drain system, and crews have to make sure there is no danger. 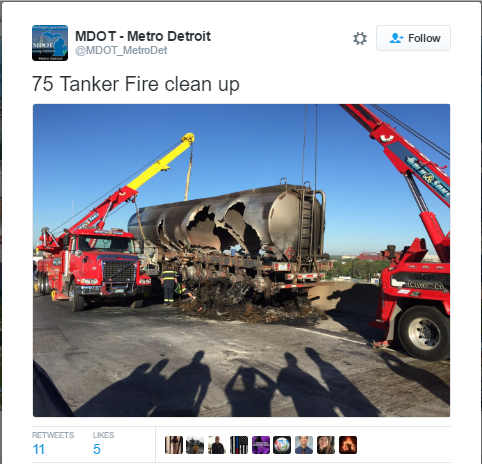 MDOT said that after inspections, the two left lanes of southbound I-75 reopened on Rouge River bridge.

Cross stated the only sad part of the fire was that it happened during rush hour. But she said that if the tanker had been loaded with any fuel, the result would have been a tragedy.

MDOT spokesperson thank Marathon Refinery crews for putting out the fire. The refinery is located just above the bridge and if it were not for them, the fire would have seriously affected travelers. If the tanker had been on fire with the container full of any fuel, even the bridge structure would have been affected.