Two suicide bombers attacked a church during Palm Sunday Mass in Indonesia, wounding 14 people. The attackers who died in the attack after blowing up themselves have been identified as a man and a woman. The attackers hit upon the Sacred Heart of Jesus Cathedral in Makassar, South Sulawesi province, around 10:30 am when some worshippers had concluded mass and were moving out for others to come in, Fox News reports. 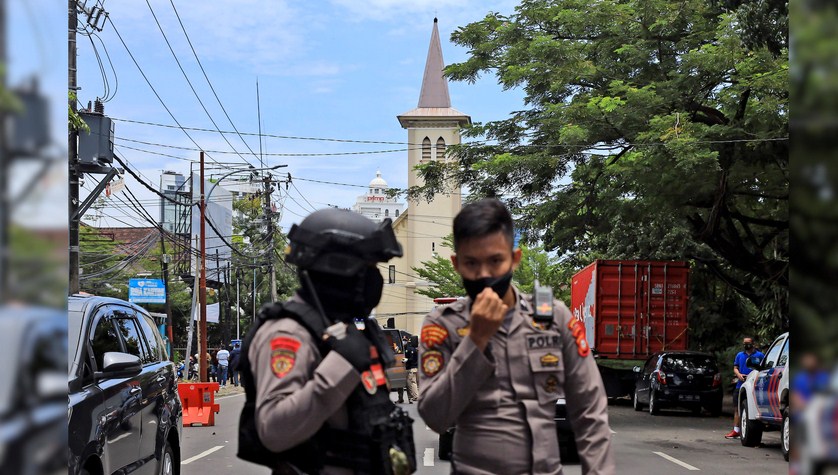 The priest of the church, Rev. Wilhelmus Tulak, said he had just concluded one service and was about to commence another when a massive explosion hit the entrance of the church. He said congregants were shocked and 14 people were injured, including four security guards, by the explosion. He said the two attackers tried to gain entrance into the church using a motorbike but set off their explosives when confronted by guards. No one was killed in the attack.

Indonesia is the most populous Muslim country in the world and home to 13% of the entire Muslim population in the world. The country had suffered a number of high-profile suicide bombings in the recent past and security officials arrested Aris Sumarsono, also known as Zulkarnaen, leader of Jemaah Islamiyah, a Southeast Asian terrorist group.

President Joko Widodo condemned the church attack and tasked security agencies to identify the perpetrators and root out their network. Widodo said everyone must be free to practice their religion in the country without fear while promising to protect the religious rights of the people. He offered prayers for the wounded and noted that the government will bear the medical costs of treating those impacted in the attack.

Security operatives have arrested at least 64 terrorist suspects linked to Jemaah Islamiyah and other terrorist organizations in the country. The sustained crackdown has weakened many militant groups in Indonesia, including those trying to regroup after expeditions with ISIS in Iraq and Syria. The last time there were major terrorist attacks in the country was in 2018 when attackers killed many people in Surabaya through suicide bombings.

Religious Affairs Minister Yaqut Cholil Qoumas said the Sunday attack on the Sacred Heart of Jesus Cathedral is condemnable since terrorist attacks are not supported by any religions in the world given the degree of harm it does to people. Pope Francis at the Palm Sunday Mass in St. Peter’s Basilica in the Vatican also urged worshipers to pray specifically for “those of the attack that took place this morning in Indonesia, in front of the Cathedral of Makassar.”