The US Navy is offering to help re-float a giant container ship that has run aground in the Suez Canal in Egypt. The massive MV Ever Green got stuck while passing the canal on Tuesday, and almost 50 other cargo ships have had to find another route while almost 100 are waiting to pass when the vessel is moved, causing massive traffic blockage for days. 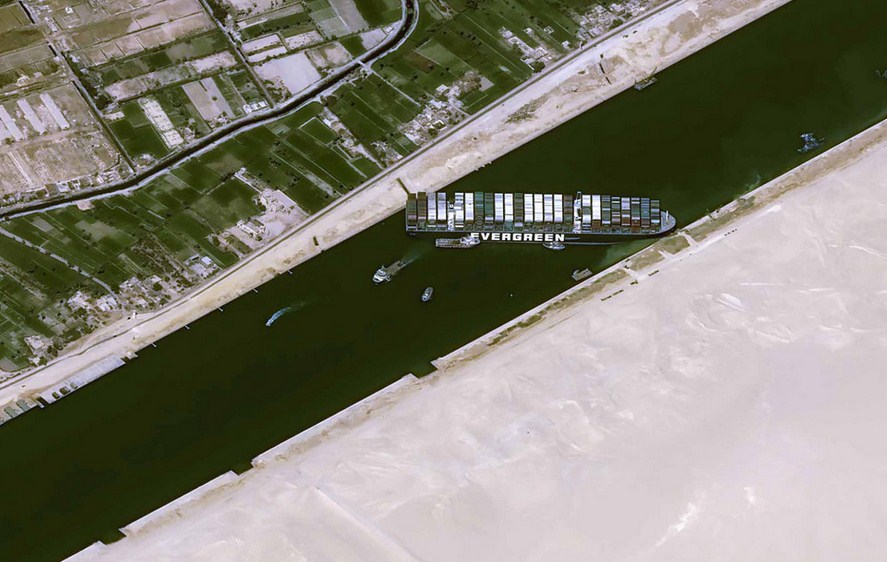 According to Egyptian authorities, the Ever Given got stuck in the canal after a big gust of wind cast it sideways and unable to proceed after getting stuck in a deep buildup of sand. The authorities about 40-knot of winds and a sandstorm created poor visibility that occasioned poor navigation, causing the giant ship to hit aground.

The EverGreen weighs 224,000 tons and measures 400 meters (1,312 feet) long and 59 meters (193 feet) wide. It is almost as long as the Empire State Building and owned by Shoei Kisen KK, a Japanese shipping company, although a Taiwanese company Evergreen Marine operates the ship. According to the authorities, about 20,000 cubic meters (706,000 cubic feet) of sand must be dredged out to free the ship and get it moving again, CNN reports.

A lot of professional dredging companies have been called in to help with freeing the vessel, but there has not been any success as of Friday night. Experts say it could take Saturday night or even Sunday at the earliest to free the massive container ship. With the removal of about 706,000 cubic feet of sand at the bow and around the stuck ship, 12-16 meters (39-52 feet) will be reached – around the size of eight Olympic swimming pools – to get the ship floating again.

A spokesperson for the US Central Command in the Middle East, Captain Bill Urban, said the Biden administration is monitoring the situation and would be ready to help free the ship at a moment’s notice.

“We have offered and stand ready to assist Egypt, and will look to support any specific request we receive,” Captain Urban said. “We continue to monitor and assess the situation, but have nothing to provide on any potential specific support at this time.”

“As part of our active diplomatic dialogue with Egypt, we have offered US assistance to Egyptian authorities to help reopen the canal,” Psaki said. “We are consulting with our Egyptian partners about how we can best support their efforts. So those conversations are ongoing, and hopefully, we’ll have more to say about that soon.”

An average of 50 ships pass the Suez Canal every day and the traffic generates about $10 billion per day in passing cargo. With every passing hour of traffic lock jam, about $400 million is lost to the global economy, experts revealed.