Krispy Kreme is offering free doughnuts “anytime, any day, every day for the rest of the year” across its 369 outlets in 41 US states to everybody who would get the COVID-19 vaccination and provide evidence of a vaccination record card. Krispy Kreme’s chief marketing officer, Dave Skena, said no one is mandated to pay for the doughnuts so long they prove that they were vaccinated, USA Today reports. 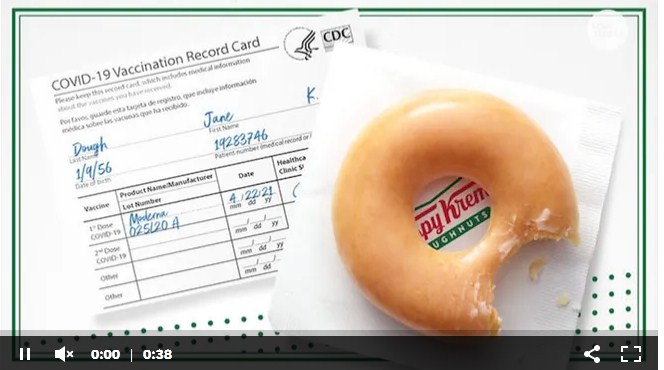 However, the free treat has drawn widespread criticisms online with many people citing obesity and discrimination as the unintended results of public generosity. In fact, Dr. Leana Wen of the George Washington University Milken Institute School of Public Health went as far as saying “free doughnuts may help move the needle…doughnuts are a treat that’s not good for health if eaten every day.”

But Krispy Kreme CEO Mike Tattersfield said the free treat is just to encourage people to get the COVID-19 vaccine, and that customers may simply combine getting the vaccine with getting a free doughnut. He added that giving out the treat is simply a matter of generosity and nothing else. In March 2020 during the peak of the coronavirus pandemic, Krispy Kreme gave out one dozen Original Glazed doughnuts to each healthcare worker who would ask for it, and Tattersfield said the entire community lauded the initiative.

“I drop off a lot of doughnuts to the healthcare system,” he said. “They’re very appreciative, given the days that they have to work…people are always looking for a little sweet treat break. It’s okay.”

Tattersfield said the giveaway initiative drew massive patronage, and people even began to order massively online when physical stores were asked to shut down across the country. He said the increased sales that the company recorded during the pandemic is still sustained till now, and that the company is picking the tab for the immense giveaway.

“Last year, we gave away 30 million doughnuts…we didn’t come into the year thinking that we’re going to do 30 million doughnuts from giveaway,” Tattersfield said. “We’ve always done fundraising and had some type of giving back to the community. The majority of the United States is a company-owned system, so we pick up the tab.”

To underscore how well people embraced the giveaway initiative, the Krispy Kreme CEO stated that in several instances, some healthcare workers visited outlets to order for 5 or 10 dozen doughnuts but ended up paying for them instead of taking them for free as announced. It must be noted that Krispy Kreme also gave people free doughnuts on Election Day, St. Patrick’s Day if people wore green, and on Halloween, if people wore a costume.

Suicide Bombers Attack Church in Indonesia during Palm Sunday Mass, Wounding 14 < Previous
4 Romantic Gifts Your Special Someone Will Love Next >