For the first time, scientists have found a planet with a comet-like tail attached to it. The planet is called Gliese 436b and is a Neptune-sized planet roughly 30 light-years from Earth. Its comet-like tail is the first of its kind found on such a small exoplanet.

Astronomers made the unique discovery with help from the Hubble Space Telescope and the Chandra X-ray Observatory. Computer models suggest that the comet-like tail extends for more than 9.3 million miles with a cloud of gas surrounding the planet that’s an estimated 1.8 million miles in diameter. The tail is made up of hydrogen gas. 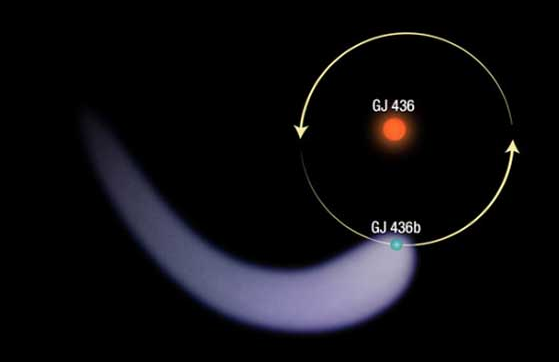 “The cloud of hydrogen is very spectacular,” said David Ehrenreich, the lead author of the study, which was published online in the journal Nature earlier this week. Ehrenreich explains, “Although the evaporation rate doesn’t threaten the planet right now, we know that the star, a faint red dwarf, was more active in the past.”

Scientists estimate that Gliese 436b has lost up to 10% of its atmosphere, although the atmosphere evaporated at a faster rate during its first billion years than it is now. Currently, the planet loses a ton of hydrogen every second, which equates to 1% of its total mass every billion years.

Co-author of the study, Vincent Bourrier, called the discovery of the comet-like tail that accompanies Gliese 436b “a game-changer for characterizing atmospheres of the whole population of Neptunes and Super-Earths in ultraviolet observations.”

The astronomers involved in this study plan on continuing their search for similar planets with comet-like tails. Bourrier suspects that there could be thousands of planets just like Gliese 436b waiting to be discovered.