Space scientists have concluded there are sinkholes on the surface of Saturn’s moon Titan – after they used NASA and the European Space Agency (ESA) Cassini mission to detect these.

There are also lakes on Titan, and what’s more, both lakes and sinkholes on the spatial body are similar to those on the surface of Earth.

Scientists already know that there are lakes on Titan, but it appears this is the first time it is becoming apparent that sinkholes are also abundant on its surface.

Meanwhile, Titan remains the only body within our solar system with lakes and seas and sinkholes. 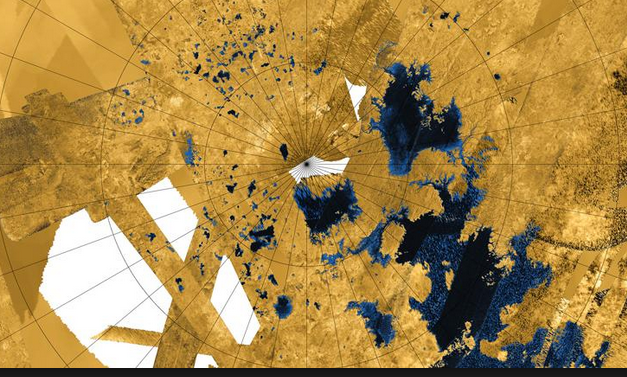 Thomas Cornet of the European Space Agency together with his colleagues wanted to get an accurate measurement of when the patches on Titan would melt to form sinkholes.

And they noted that they “compared the erosion rates of organics in liquid hydrocarbons on Titan with those of carbonate and evaporite minerals in liquid water on Earth.”

The researchers noted that the process of dissolution on Titan occurs at a 30 times lower compared to what obtains on Earth – and the reason for this is because Titan’s year is longer than the one on Earth, and that rains occur on Titan during summer.

They also stated that the dissolution activity on Titan is what is responsible for the lakes and seas on the body. The researchers also believe that melting of the limestone and gypsum adds to groundwater on the body, while rains sink through the rocks to add to the lakes.

The scientists found that the chemistry of the rocks on the surface of Titan, the surface temperature, as well as the rate of rainfall all contribute to the sinkholes on the extraterrestrial body in space.

ESA’s Cassini project scientist Nicolas Altobelli stated that the features of Titan compares with those on Earth, and the processes for creating those landscapes are similar to what we have on Earth.