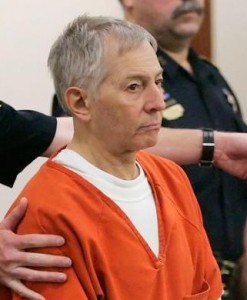 Robert Durst the real estate heir will return to California to face a first-degree murder charge as he waived extradition during a Monday hearing.

Durst, who is 71, appeared before a New Orleans judge Monday. On Saturday, he was arrested on charges of murder the night before audio of his voice was broadcast on a HBO documentary saying, “What the hell have I done? Killed them, of course.”

The New Orleans magistrate said Durst could leave immediately for California. He also said that Durst could be given pain medication prior to leaving for California after Durst’s attorney said the accused had neurosurgery.

Dick DeGuerin told the media on Monday that his client might face other charges as well in New Orleans and might not be leaving this week for Los Angeles.

Durst was apprehended by FBI agents on Saturday at a hotel for the murder of Susan Berman in 2000 at her home in Beverley Hills, California, said an FBI spokesperson.

Durst was laying low at this hotel avoiding the attention at his home in Houston, said his lawyer.

The heir to a real estate fortune in New York shuffled into the courtroom in New Orleans with his hands shackled wearing sandals. He smiled after turning to the gallery and appeared at one point to fall asleep.

Later he did answer yes to the judge’s questions about the waiving of extradition.

Sunday evening on HBO the final episode was aired of The Jinx, a documentary series featuring Durst, who had been linked to the deaths or disappearances of two others besides Berman. In the documentary’s final moments, following an interview with Andrew Jarecki the filmmaker, Durst went to the bathroom while wearing a wireless microphone.

A rambling monologue followed where Durst said amongst other things the quote about killing everyone. The producers of the film do not make it clear if they confronted Durst over his words. However, the rumor is two years passed prior to the filmmakers finding the audio.