The US Navy has charged a sailor with arson for setting fire to an amphibious assault ship. The unnamed seaman was convicted of destroying the USS Bonhomme Richard on July 12, 2020, when it docked at Naval Base San Diego. The motive for the arson and the evidence that led to the sailor’s conviction was not publicized. 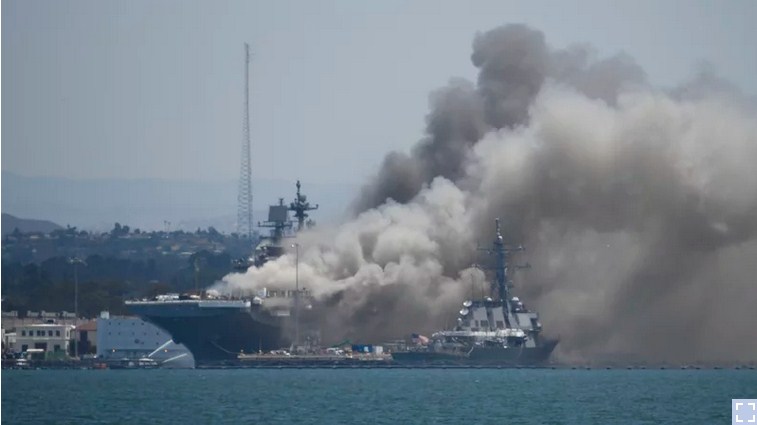 According to Commodore Sean Robertson, the spokesman for the US 3rd Fleet, the sailor was charged with aggravated arson and willful hazarding of a vessel. The convict worked with the crew on the ship when he committed the offense. The ship burned for more than four days and firefighting vessels, as well as firefighters, struggled to contain the inferno with cannons of seawater.

Helicopters also dropped water from the air to put out the flames.

Given that mechanical, structural, and electrical damage occurred on the ship, it was estimated that replacement would cost up to $4 billion. The ship had been undergoing a two-year upgrade costing about $250 million when the incident occurred. The Bonhomme Richard was an amphibious assault ship that could serve as a mini aircraft carrier when deployed.

The fire began at the storage area underneath the ship, where maintenance supplies and cardboard boxes were kept. The winds flamed it up the elevator shafts and exhaust stacks, and two major explosions heard 13 miles (21 kilometers) away aggravated the fire. The massive smoke it produced remained over San Diego for several days.

About 160 sailors were working aboard the 840-foot (256-meter) vessel when it went up in flames. Over 60 sailors and civilians sustained serious injuries caused by heat exhaustion and smoke inhalation after the incident, but there were no fatal cases.