As NASA’s New Horizons is fast approaching for its July 14 rendezvous with Pluto. It will be the first ever flyby besides the dwarf planet. As the spacecraft nears the fag end of its ten-year-long journey, it is sending ever more clear pictures of Pluto and its Moons, and we have a view of the varied surface of Pluto.

We are accustomed to an image of Pluto represented by cool colors because of its frigid temperatures. The reality is quite different. If we look at the last color photo of Pluto and its largest moon, Charon which was created using images and color data taken on June 25 and 27 and it revealed a grey colored the moon and a peach like dwarf planet. 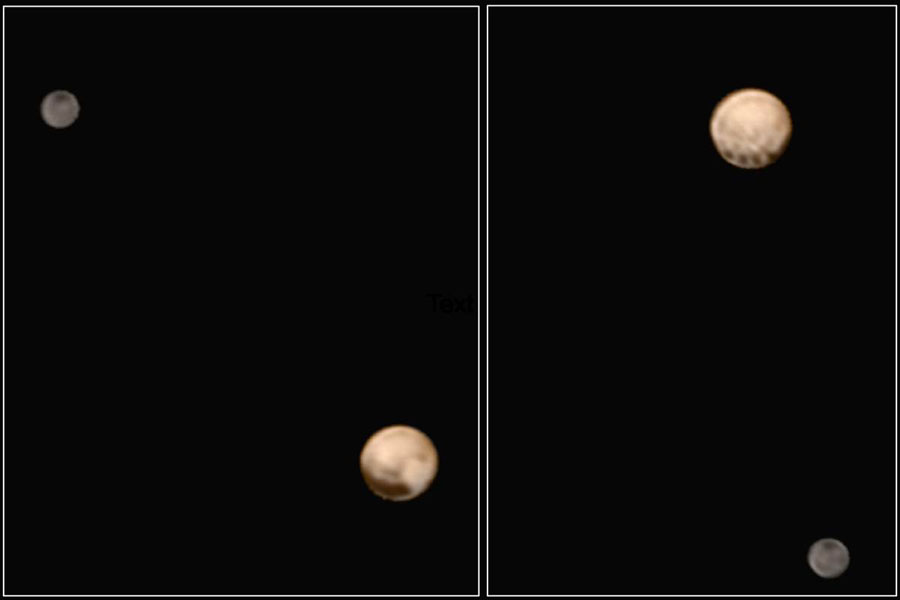 Looking closely at the pictures one can see some white spots on Pluto’s equator. These spots are evenly spaced and of the same size. Each is about 300 miles in diameter.

Alan Stern, New Horizons principal investigator, said in a statement that the spots are puzzling and so is the long-standing and dramatic difference in colors and appearance of Pluto in comparison to its grayer moon Charon.  Alan is expecting even clearer pictures in the coming days and will ultimately clear the mystery of the spots on Pluto.

The mission revealed that Pluto has two sides that are distinct from one another. One face of Pluto is very smooth while the other face holds peculiar spots. These spots appear at the base of the planet in the pictures and could be due to the tilt of the planet. The Horizons Team members created an accurate picture of the two sides of the dwarf planet by combining black-and-white pictures of Pluto and one of Pluto’s moons Charon. The pictures were obtained from the spacecraft’s Long-Range Reconnaissance Imager and the lower-resolution color data from the Ralph instrument.

Dermatologists warn Suntan Art increases Risk of Skin Cancer < Previous
Why Ben Affleck and Jennifer Garner divorced? Jennifer Lopez might be the one to blame Next >