Bad weather is preventing NASA from launching its saucer shaped spacecraft that was originally set for launch on Wednesday of this past week. The saucer is officially called the Low-Density Supersonic Decelerators (LDSD) project, and after high waves were a concern earlier in the week, windy conditions are now preventing the launch of the balloon from the U.S. Navy’s Pacific Missile Range Facility on the Hawaiian island of Kauai. 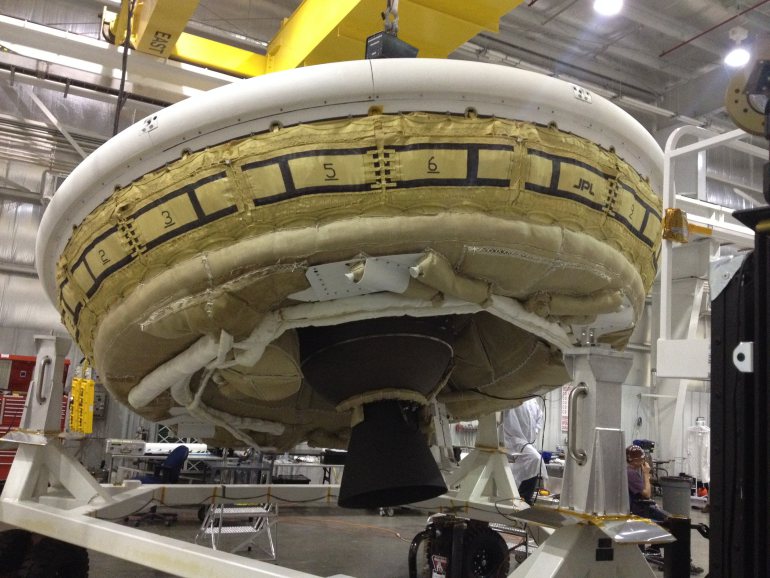 The LDSD has technology, including a doughnut-shaped shield and a parachute that will slow the speed of the craft during descent. If this technology is successful, it could play an important role in the further exploration of Mars, as NASA is planning an ambitious robotic mission to the red planet, but one that will require a proper landing.

The plan is for a high-altitude balloon to carry the LDSD to an altitude of 120,000 feet, at which point the LDSD will be dropped from the balloon, only to have its rocket engine lift it up to an altitude of 180,000 feet. The doughnut-shaped shield, which is called the Supersonic Inflatable Aerodynamic Decelerator (SIAD) would slow down the craft’s descent, with the parachute slowing it even further.

The parachute has been re-designed to be much stronger since last year’s test of the LSDS, which ended with a splashdown in the Pacific Ocean that was much harsher than what NASA was hoping for. NASA is hoping the changes will lead to much softer landing that will allow them to move forward its plans to use this technology to land probes on Mars.

Waves in the Pacific made things unsafe for the recovery crew earlier in the week, and now with windy conditions in Hawaii, NASA has had to delay its test of LDSD even more. NASA says Saturday and Sunday are out of the question, and that weather conditions will be reevaluated on Monday, at which point they are hopeful conditions will be favorable to finally test the LDSD.