Four-time Grand Slam tennis champion, Naomi Osaka, lit the Olympic cauldron at the Opening Ceremony of the ongoing 2020 Tokyo Olympics on Friday. The 23-year-old is a Japanese sports star and one of the brightest tennis stars to come from Japan. Her father is Haitian-American and her mother is Japanese, and she was born in Japan before being taken to the United States at the age of three. 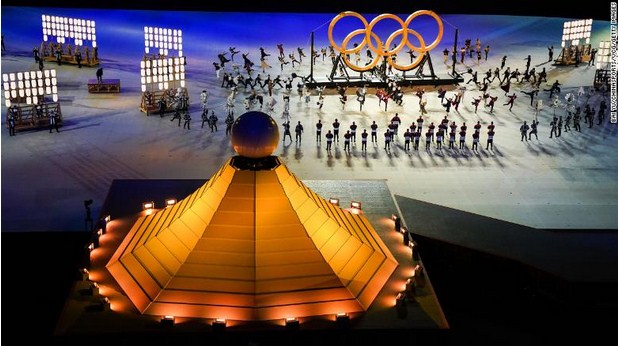 Osaka expressed joy at being chosen to light the cauldron and expressed gratitude to the organizers. After she lit the cauldron, she tweeted her appreciation to everyone involved in choosing her for the honor.

“Undoubtedly the greatest athletic achievement and honor I will ever have in my life,” Osaka tweeted. “I have no words to describe the feelings I have right now, but I do know I am currently filled with gratefulness and thankfulness. Love you guys thank you.”

Osaka won her first Grand Slam title in 2018 and would have taken part in the French Open this month, but she withdrew from the competition on the apology that she had been a victim of depression for some time. She also pulled back from the Wimbledon competition by citing her mental health challenge as well, Yahoo reports.

Although only a handful of people were allowed to attend the Tokyo Olympics Opening Ceremony due to the COVID-19 pandemic, US First Lady Jill Biden and French President Emmanuel Macron were in attendance. Japan’s Emperor Naruhito was also at the opening ceremony attended by 950 people even though the stadium has a capacity for 68,000 people.

About 600 athletes came to represent the United States, but only 200 were allowed to attend the opening ceremony. For Australia, 472 athletes came to Japan, but only 63 were allowed to be part of the ceremony. Many athletes and Japanese nationals who could not gain access to the stadium because of the COVID-19 restrictions in place complained bitterly because of the restrictions.

One of the complainants was American triple jumper Will Claye; he said it was unfortunate that athletes attending the Olympics for the first time would not have the opportunity of meeting with their idols at the stadium because of the coronavirus limitations.

“My first Olympics in 2012, I walked and I was able to meet and take pictures with some of my idols in sport, some of the athletes that I look up to like Kobe (Bryant), LeBron (James) and actually being able to spend time with these people while we were preparing to do Opening Ceremonies,” Claye said. “And those are the memories that last a lifetime…for someone who this may be their first Olympics, it’s a once in a lifetime thing. You never know if you’ll be able to get back to that stage.”

When the opening ceremony got underway on Friday, the Tokyo night sky became illuminated with brilliant firework displays.

The Most Popular Trading Strategies < Previous
Rodney Alcala, Suspected Of Raping and Killing 130+ Women, Dies in Prison At 77 Next >