Scientists have found the fossil of a monster scorpion that lived 443 million years ago in southern China. Named Terropterus xiushanensis, the scorpion which measured more than 3 feet long, lived in the southern China seas. Its fossil was found on the seafloor and it is believed it was a carnivorous and venomous insect, judging by its scary features. 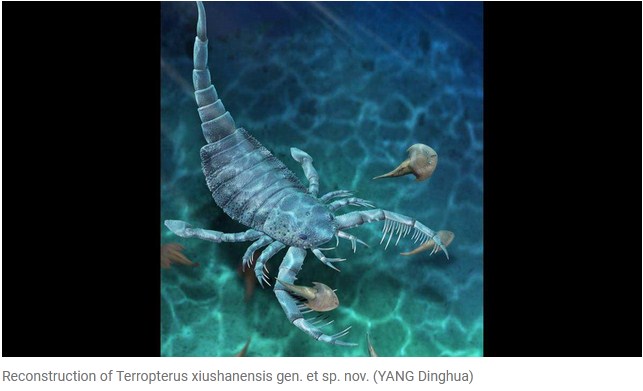 Experts grouped the newly found giant sea scorpion as belonging to the Mixopteridae family. Its appendages were spiny with spikes, and its tail looked like a serrated knife. Scientists said its limbs were probably used as a catching basket to trap prey, just like its relatives which were discovered in Estonia, Norway, Scotland, and New York.

“These limbs were presumably used for prey capture, and analogies can be drawn with the ‘catching basket’ formed by the spiny pedipalps of whip spiders,” the study authors wrote. “Our knowledge of these bizarre animals is limited to only four species in two genera described 80 years ago.”

The xiushanensis is the first of its kind to be discovered in southern China and was probably the oldest member of the Mixopteridae family. The features of the giant arachnid were very fearsome and the monster scorpion was believed to have existed during the Early Silurian period from 443.8 million and 419.2 million years ago. Southern China was known as Gondwana during this ancient period.

This dog-sized scorpion terrorized the seafloor and consumed nearly everything on its path. It must have been a voracious eater that was at the apex of the food chain. It is believed that the emergence of sharks and other greater predators may have led to the decline and eventual extinction of the giant sea scorpion.

“Bearing such large spiny legs and probably a poisonous telson to catch and strike the prey,” the researchers write, “Terropterus is likely to have played an important role of top predators in the marine ecosystem during the Early Silurian when there were no large vertebrate competitors in South China.”