Miley Cyrus is at it again – winning worldwide applauses at the expense of her friends; and her latest photo joke is the photoshopped butt of pal Justin Bieber’s naked body which she released recently.

Bieber, had earlier posted a full nude photo of himself pointing out to an rocky island situated at the at the middle of the sea – he was standing on a wooden deck with his naked back to the camera. 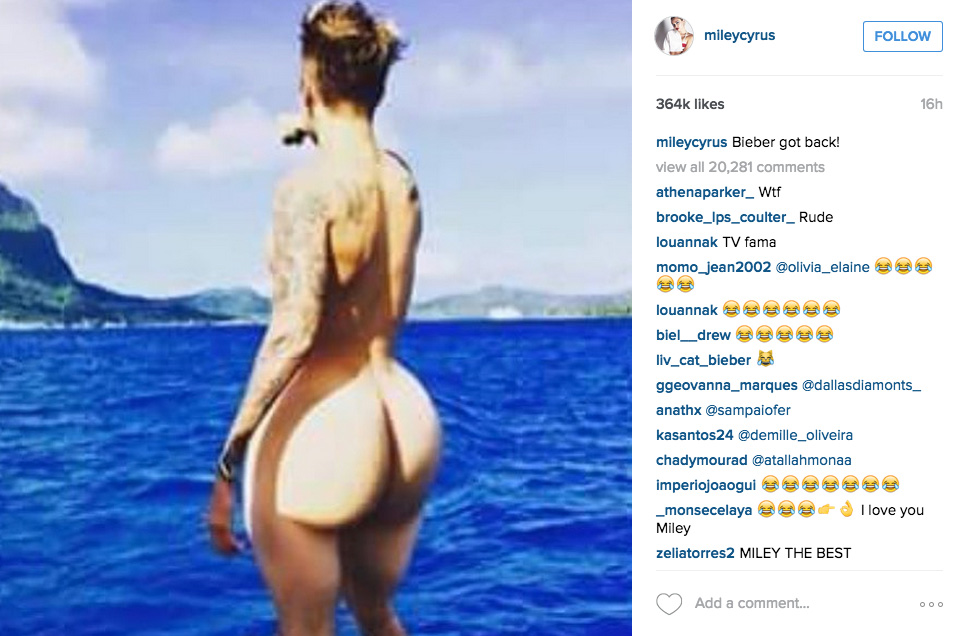 But this is the image that Miley photoshopped and edited to show an enlarged female rump on Bieber – the kind of derriere that fans have come to associate with Kim Kardashian.

Twenty-one-year-old Bieber had captioned his photo “Look” on Instagram, but after editing and reposting it on her own Instagram profile, Miley had changed the caption to read “Bieber got back!”

And funny enough, hundreds of Miley’s fans have been resharing the image on their social media walls, with some commenting that Miley is so creative at casting Bieber in such a hilarious light. Some expressed their approval and love for Miley after seeing the edited image, making funny comments.

This is not the first time Miley is doing this. She had earlier released an image of Rihanna’s lower back and then a photo of Bieber, with the caption “Bieber vs Rihanna (sic).”

Currently vacationing with pal Joe Termini, Bieber has not found time to respond to Miley’s pranks behind his back.

But Bieber had equally taken a swipe at Miley this past April, when he took a photo of himself with his hands clasped and his hair done into a ponytail. Miley had said Bieber was impernating her in the image, given the bleaching of his hair to reflect the blonde of Miley.

“I did see Justin the other day and I thought I was looking at a mirror and then I realized that it was Justin Bieber!” Miley said excitedly. “My double life, I never was ever Hannah [Montana], I was always just Justin Bieber and that was my decoy to avoid the fact that I’m actually Justin Bieber.”

NASA’s NuSTAR telescope discovers hidden cluster of black holes < Previous
The US, UK, China, and Brazil economies are weakening the OECD revealed Next >