McDonalds Strategizing on How to Boost Dwindling Sales 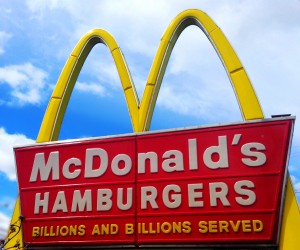 Throughout the world, sales for the McDonald’s fast food chain are dwindling. In an effort to turn the company around, new plans are expected to be revealed sometime next month.

In a statement from Steve Easterbrook, the new CEO of McDonald’s, initial details of the new plan will be shared on May 4. He added that there is a significant interest for the company to embrace change.

For decades, McDonald’s has achieved unrivaled success, which according to Easterbrook is also what made the company conservative. Currently, McDonald’s is the largest hamburger chain in the world but even with that, the company could not stop the 2.3% decline at certain locations during the first part of 2015. Results for this month are also down.

As part of the decline, the US experienced a 2.6% drop, primarily because of a growing number of consumers who are opting for healthier food choices. Recognizing this changing trend, McDonald’s has already made several important changes to how the business is run.

One change in the US is a grilled chicken recipe made from animals that are not raised on antibiotics. Another change has to do with pay. Workers are demanding $15 an hour, as well as a union. According to a company spokesperson, wages will be increased and vacation time provided for stores that are company owned. As to the amount of pay, no details have been provided.

Globally, McDonald’s’ goal is to change the company’s image to recover many of its lost customers to the competition. In comparison, companies like Chipotle Mexican Grill are doing great. This chain saw a 10.4% increase in sales during the first quarter of this year. Executives with the organization agree the chain is giving people a new viewpoint of what fast food should be.

Also seeing an increase in sales was Taco Bell’s parent company, Yum Brands. During the same first three months, the company saw a 6% increase in sales, primarily because of the new breakfast menu now available.

While competitors are seeing increases, McDonald’s continues to struggles in many parts of the world. For established locations in Africa, Asia, and the Middle East, sales dropped 8.3%. The conflict in Chine during 2014 coupled with consumer perception in Japan had a direct impact on sales in Asia.

However, McDonald’s’ sales have also declined in Europe due to softness in Russia and France. Although the change was only 0.6%, numbers are moving in the wrong direction. The current state of the company is most evident when looking at earnings. One year ago, McDonald’s earned $1.2 billion or $1.21 per share whereas for the current period ended March 31, sales were down to $811.5 million or $0.84 per share.