Last year, three deaths and two other non-fatal cases caused by Listeria were linked to Texas’ Blue Bell Creameries and its products. The conclusion came after an investigation executed by health authorities in Texas, who discovered that Blue Bell was the responsible of the Listeria-related deaths due to contamination in its facilities.

This year, the brand released a report about the cases to explain what happened.  Agreements with authorities ended up in Blue Bell paying a $850,000 fine. Blue Bell Creameries, the ice creams franchise, was founded 109 years ago in Brenham, a village in Texas, where the headquarters are still located, and is one of the most popular ice cream brands in the southern states.

Listeriosis or Listeria, according to the Centers for Disease Control and Prevention (CDC), is a severe infection produced by a bacterium called Listeria Monocytogenes, which affects the human body usually through the ingestion of contaminated food. People vulnerable to this bacterium are mostly pregnant women, newborns, adults with weakened immune systems and the elderly population, even when in some cases people without those risk factors can be affected as well.

The symptoms of Listeria includes fever, gastrointestinal symptoms like diarrhea and muscle aches. Since it is an invasive infection which the bacteria spreads not only in the digestive tract but to other parts of the system, it’s considered an affection that can be severe.  Pregnant women with Listeria can suffer fetal loss or bacteremia in their newborns, while in people with weak immune systems or with conditions that impair the immune system’s conditions the Listeria can lead to septicemia and meningitis.

According to the CDC investigation, more than 10 Blue Bell shops were affected by contamination of Listeria and three out of the ten cases discovered were fatal. The states affected were Arizona, with one instance, Oklahoma, with one example, Texas, with three cases and Kansas with five cases. The deaths were reported from Kansas. 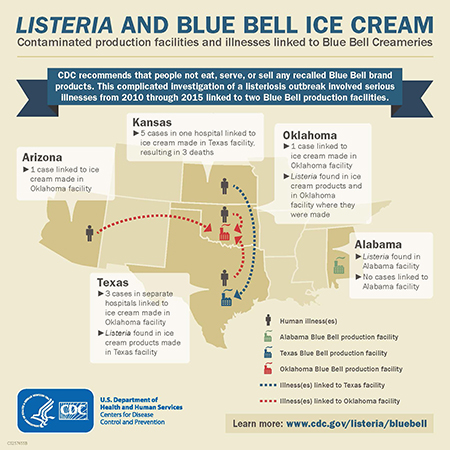 In 2015, the South Carolina Department of Health and Environmental Control detected Listeria as part of routine supervision and sampling from Blue Bell products. Blue Bell Creameries responded to the Listeria outbreak shutting down temporarily some of its production plants.

The company began executing Listeria tests in its facilities to take proper precautionary measures, which included throwing millions of ice cream and other frozen products’ gallons in sanitary disposal facilities.  Some of the machines used in the plants were so contaminated that Blue Bell was forced to stop using them instead of just cleaning them up. The company voluntarily recalled all of its products in 2015.

The findings by the investigation executed by the Food and Drug Administration and the CDC were published in 2015. However, that did not mean that the problem was over. On the contrary, the legal side of the outbreak had just begun.

The Justice Department examined Blue Bell Creameries over the listeria response, including all the actions they executed in 2015, as well as the massive cut of staff that sent about 1,400 workers home.  The criminal investigation focused as well on the company’s food safety mechanisms.

The accusation stated by the Texas Department of State Health Services was from the enterprise allowing adulterated product to enter the marketplace and cause illness. Blue Bell is now forced to check always for Listeria in its facilities and products, with the obligation to notify the state inspectors of any positive result. In that case, full access to the authorities must be given to check the plants and products.

The final agreement signed by Blue Bell and Texas health officials ended in a payment of $850,000 with some -mostly favorable to the company- conditions. The first $175,000 must be paid within a 30 days period, the rest of the penalty can be paid within the following 18 months. The death of some because the listeria-infected products can seem not enough to bring Blue Bell to court, due to the size of the company and its revenue.

Blue Bell Creameries is now executing a five-phase plan (“Market Re-Entry”) to recover sales and customer’s trust, as well to face correctly all the legal responsibility linked to the Listeria outbreak case. The plan involves a program of new product’s shipment to Oklahoma and Texas’ stores and the return of thousands of employees to the plants.

$175,000 #BlueBell penalty is significant because government fines of any kind are rare in food safety cases.