BERKELEY  – New images transmitted by the Hubble Space Telescope have revealed that stars that get separated or isolated from their galaxies end up dying in total isolation when they run out of energy, especially if they are so far removed in space from their parent galaxies.

However, stars that are very massive in size tend to explode and become visible as luminous supernovas, whole those that are small in size just fizzle out of energy and die out. Three stars that were found with the help of the Canada-France-Hawaii telescope on Mauna Kea in Hawaii between 2008-2010 suffered this fate. 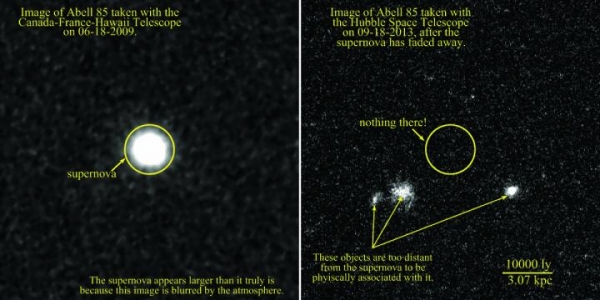 Also known as intracluster stars, these isolated stars get as distant from their galaxies by as much as 300 light-years, and their locations provide astronomers with information on the evolution and composition of galactic clusters as well as the vast spaces existing between huge galaxies.

According to the lead author of the study, Melissa Graham of the University of California, Berkeley, “We have provided the best evidence yet that intracluster stars truly do explode as Type Ia supernovae and confirmed that hostless supernovae can be used to trace the population of intracluster stars, which is important for extending this technique to more distant clusters.”

With the findings already placed for publication with the Astrophysical Journal, Graham noted that Type Ia supernovae might be involved as two stars orbiting one another in a peculiar binary system, meaning that they were a couple before one got exiled and died.

According to Graham, one of the stars in the binary system might be a lower-mass white dwarf that may be unfortunate to get eaten by the stronger companion for getting too close, and the dwarf star might also usurp gas from the outer layer of the second star and thereby starve it to death, or to just explode as a Type Ia supernova.