Chinese smartphone manufacturer, Huawei, is launching the release of its newest flagship smartphone, Mate X2, on February 22. The foldable device has a screen that folds inward and is similar in design to Samsung’s Galaxy Z Fold series. The Mate X2 seemingly folds inward while the earlier Mate XS and Mate X fold outward. 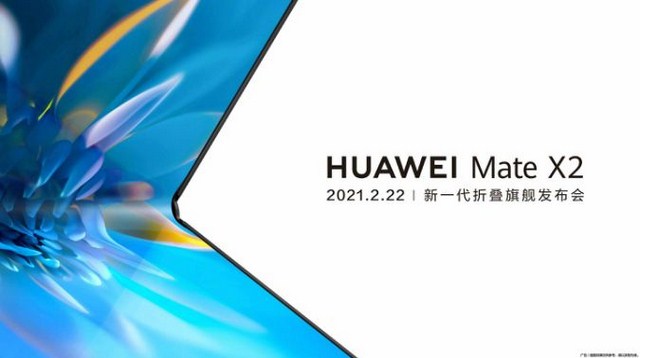 The February 22 release date was announced on the company’s official Weibo account with a teaser photo. The Business Group CEO for Huawei Consumer, Richard Yu, said the Mate X2 is complete with surprises and that he has been using it for a significant period of time.

While many things remain unknown about the Mate X2 since China as a country and Chinese companies tend to be secretive about almost everything, analysts opine that the foldable smartphone may possibly possess the Kirin 9000 chip used for the manufacture of the Mate 40 Pro. In fact, it is hard to say anything about the Mate X2 with specificity since Huawei only released a fraction of the photo of the device instead of its entire view.

Considering that former President Trump’s administration blacklisted Huawei and several Chinese tech companies from doing business with the United States, Mate X2 may not readily ship to the US and internationally since it will be devoid of Google apps and services upon which most people in the world have come to rely on. Huawei is not starved on mobile processors for its smartphones and this will impact its market reach for newer devices.

It remains unclear whether the foldable Mate X2 will be shipping globally when it launches later this month, but potential customers can afford to wait to see what plays out. Company officials are keeping a sealed lip over the phone’s affair, but analysts say Huawei is known to spring surprises and people are waiting to find out.

Type 1 Vs Type 2 Diabetes – Not The Same < Previous
Parler’s Board Sacks CEO John Matze; Says He’s Not a Part of the Decision Next >