The latest episode of ‘Between Two Ferns’“, streamed at Funny or Die, features the Democratic presidential nominee Hillary Clinton in an offbeat interview with the show’s host, comedian Zach Galifianakis, showing a bit of a sense of humor herself.

Clinton is introduced at the beginning of the show with a jab at her diagnosis of pneumonia, along with her name being slightly misspelled: “Hilary Clinton. Had pneumonia.” 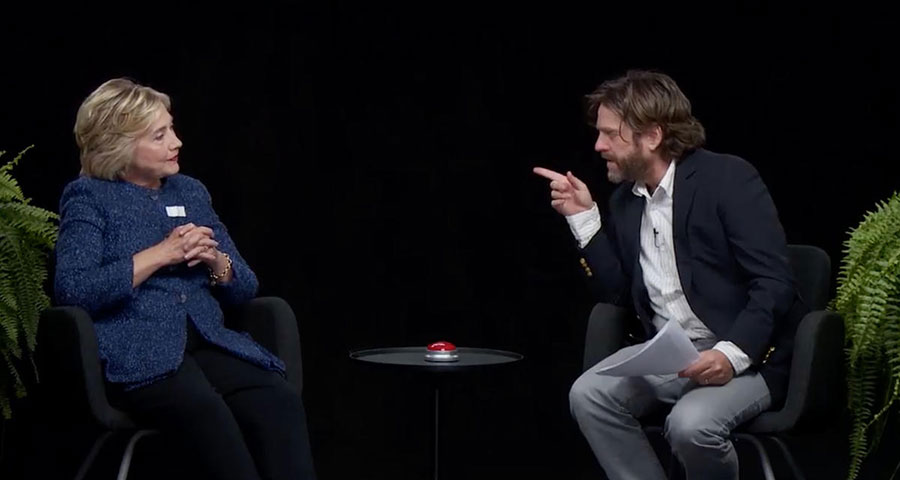 The “Between Two Ferns” talk show

The is deliberately made to resemble a low-budget, amateurish production, complete with comedic errors in their onscreen graphics. Once, it even featured celebrity guest Bart Pit and his movie 12 Years a Salve.

Clinton jokingly regretted the interview, as Galifianakis took jabs not only at her but also her opponent, Republican candidate Donald Trump.

“When you see how well it works for Donald Trump, do you think to yourself, ‘oh, maybe I should be more racist,’” joked Galifianakis, prompting Clinton to shake her head, laughing.

He also referenced that she once attended Trump’s wedding, asking if First Lady Michelle Obama wrote Melania’s vows — a clear punch at the fact that Trump’s wife plagiarized Mrs. Obama for a speech to the Republican National Convention.

The pair joked about Clinton’s possibly status as the first female president and the fact that she would be, for the youngest generations, their first white president in almost a decade.

Galifianakis also implied at one point that Clinton’s pants made her resemble a “librarian from outer space,” and started the peculiar interview with reference to Clinton’s critics by claiming that nobody would have anything bad to say about her decision-making processes anymore after appearing on the show.

A candidate with humor

This is not Clinton’s first time in a not so serious interview. Just last Monday, she appeared on the “Tonight Show” with Jimmy Fallon, and last month she had an appearance on “Jimmy Kimmel Live.” Last fall she also had a “bar talk” on “ Saturday Night Live.”

Her appearance in “Between Two Ferns” is not only the latest in a string to show a different side of herself to the public, one more carefree and funny but also seems to satirize her critics. Especially those who always attack her with sexists remarks.

About ‘Between Two Ferns with Zach Galifianakis’

The comedic talk show is characterized by the interactions between the host and the guests as they sit between the two large potted ferns on set. Those in attendance exchange jabs and insults towards each other.

So far, the talk show has had twenty-two episodes since its creation on January 4, 2008. The first episode featured Michael Cera. A television special was released on Comedy Central on May 6, 2012, featuring Jon Stewart, Tina Fey, and Richard Branson as guests.

The series has been nominated for the Creative Arts Emmy Award three times: in 2013, 2014 and 2015 in the “Outstanding Short-Format Live-Action Entertainment Program” category, winning in 2014 and 2015. The first politician to be a guest on the show was President Barack Obama himself, back on March 11, 2014.