Gold and Precious Gems Found In Grave of Woman Buried 1,600 Years in Bohemia

Archaeologists from the East Bohemian Museum in Hradec Kralove, Czech Republic, have discovered gold and precious gems in the grave of a woman buried 1,600 years ago during the 5th century. The discovery was made in 2019, and it was found to contain a headdress adorned with gold discs, four silver buckles inlaid with gold and gems, glass beads, a bone comb, a ceramic pot, and an iron knife among other ancient artifacts. 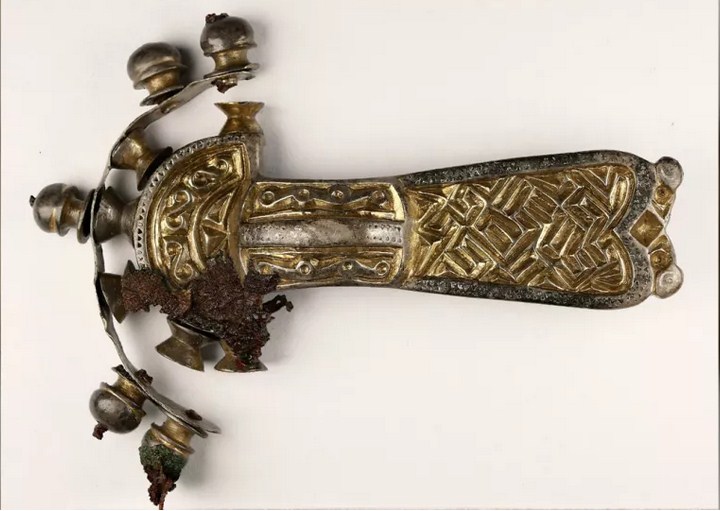 Researchers said there are five other ancient graves at the burial site, but these have been looted by thieves and their buried artifacts stolen. The researchers believe the graves were plundered a few hundred years after the decorated corpses were buried; however, the graves still contained broken skeletons, knives, a sword, and other mundane items used for burial purposes in prehistoric times.

The grave of the woman with the headdress and silver buckles was also found to contain ancient textile materials. A kind of fabric found on the buckles was of two different materials; one was possibly the fabric used to hold the buckles together, while the other was possibly a clothing material used to wrap the deceased for burial. What appeared like fur and leather were also detected on the buckles, but the archaeologists believe this could be from another fabric or garment.

The investigators have reasons to think the ceramic pot was used for cooking purposes and meat storage since chemical traces revealed fats and acids. The woman in the grave is believed to be between the ages of 35 and 50 years when she died.

Further analysis of the other graves besides that of the woman of interest indicates the occupants should be between 16 and 55 years when they died. The skeletons had been destroyed by looters who plundered the graves for treasures and researchers now find it difficult to make out the sex of the individuals in the graves.

But chemical analysis yielded clues to the health of the people when they were alive. In a particular instance, one individual was found to have had cancer judging from their skull and pelvis, while another individual showed signs of arthritis and even stroke judging from the asymmetrical muscle mass in the bones of the legs.

The researchers plan to conduct radiocarbon dating to precisely determine the actual ages of the individuals in the graves and to determine if they were locals of the Bohemian region in the present-day Czech Republic or if they migrated from other regions. The scientists also plan to determine what the people ate in their lifetime and if their food changed over time. This information will be obtained from a chemical analysis of their bones.

The Inspiration Behind THRIVE I and THRIVE II – Two of the World’s Most Viral Documentaries < Previous
Elon Musk, Jeff Bezos, Mark Zuckerberg Generated Over $360 Billion in Profit during the Pandemic Next >