The Mississippi River and its tributaries are currently at record lows across several states. From Illinois to Louisiana, satellite and drone images reveal that the great river is decreasing fast due to prolonged drought. Many of the gauges used to determine acceptable low-water levels have dropped below significant thresholds, getting environmentalists worried. 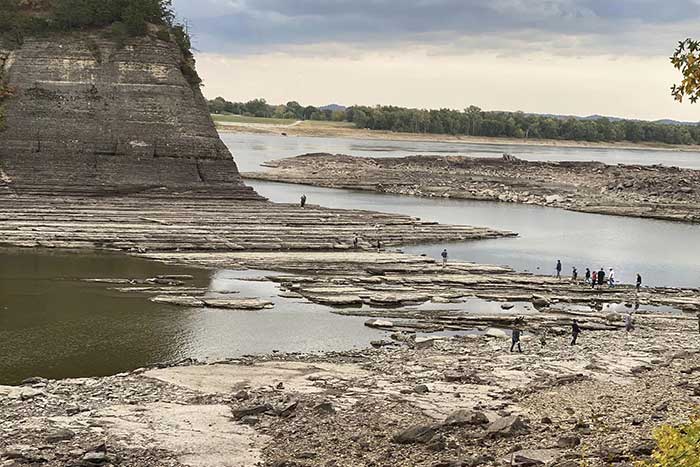 Near Memphis, the Mississippi River has shrunken away so much from its banks and the National Weather Service said the river dropped minus 10.75 feet this week – the lowest level ever in Memphis. The US Drought Monitor disclosed last week that drought across the South and Midwest since March is impacting the great river negatively.

The national agency stated that since 2016, more than 134 million are negatively impacted by severe drought conditions, and that about 60,000 square miles area which is almost the size of Georgia is affected by drought in the Midwest.

“Topsoil moisture continues to dry out across portions of the Ohio Valley and the Corn Belt,” the Drought Tracker reported on Thursday, adding that “deeper soil moisture remains very low also across much of the Mississippi Valley.”

From July 14 to October 17, the National Weather Service blamed very dry conditions for the reduction in the levels of rivers flowing into the Mississippi River. The Platte River and other tributaries in Nebraska have dried considerably, and dry sand is all that can be seen where waters used to flow into the Mississippi. According to the National Oceanic and Atmospheric Administration (NOAA), the drought may persist until or slightly beyond January, further impacting water levels in the Mississippi River.

An island in the center of the Mississippi River which is only reachable by boat south of St. Louis is now accessible by people on foot since the river is now dried up. A woman walking on the dried banks of the great river saw dry bones which the authorities identified to be the lower jawbone, rib bones, and other bone pieces of a human being. Several pieces of human remains were equally found in Lake Mead when the levels of the water dropped very low.

Saltwater from the Gulf of Mexico is also nearly entering into drinking water in Louisiana, and army engineers are trying to build a levee underwater to stop the salt water from reaching there. In Tennessee, the valley authority said they will release large amounts of water from two dams to raise the water levels in the Mississippi River.

“To help stabilize commercial navigation conditions on the lower Ohio and Mississippi Rivers, we are scheduling special water releases from Kentucky Dam on the Tennessee River and Barkley Dam on the Cumberland River to help low river level impacts,” the Tennessee Valley Authority stated.