The deepest dive pool in the world has opened in Dubai. The port city of the United Arab Emirates is also home to the tallest skyscraper in the world. The Deep Dive Dubai which has a depth of 196 is deeper than the Deep Spot in Poland by almost 50 feet. The Deep Spot of Poland held the title of the deepest pool from the Guinness World Records, but the title is now held by the new Dubai dive pool resort. 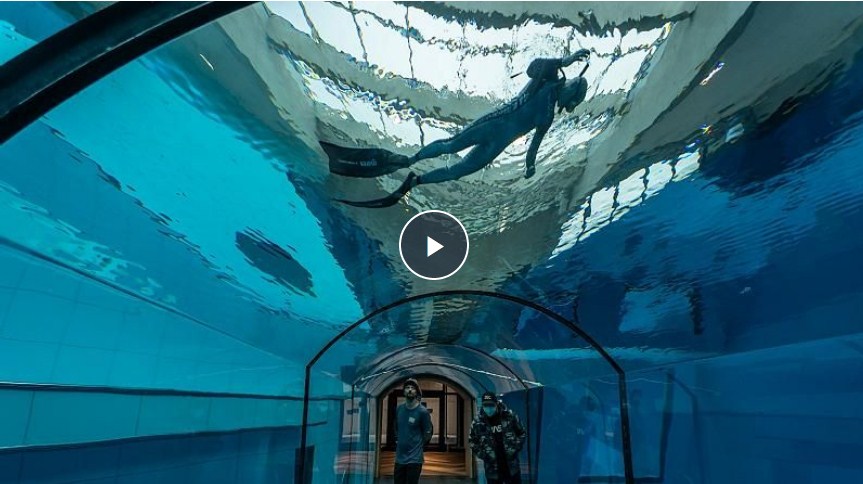 Although the facility will be opened to members of the public in July, it is currently available by invitation only and has been visited by the crown prince of Dubai, Sheikh Hamdam bin Mohammed bin Rashid Al Maktoum as well as American movie star Will Smith.

The dive pool features a sunken underwater city that divers can explore as much as they want. The city has dilapidated buildings and abandoned apartments that divers can search for fun. Explorers can play, chess, or football in the underwater city and there is also an arcade that they can explore. The pool is fitted with sound systems and exotic lighting to give divers an impression of different atmospheres.

“There are quite a few dive pools in the world that are deep, but this one is so much more interesting,” Deep Dive Dubai director Jarrod Jablonski said. “It’s not only deepest and largest, but the sunken city effect makes it next world order. There are so many things it’s really not fair to call it a pool.”

About 56 cameras are installed into the deep pool so that staff can watch out for the safety of divers at great depths, and the pool facility has a restaurant from where friends and family who are not diving can watch their diver friends explore the sunken underwater city via large screens. And in case of any emergency, an advanced hyperbaric chamber is available to cater to the needs of about 12 people.

The Deep Dive Dubai can also be used as an underwater film studio by moviemakers, and an editing facility is available to edit movies made in the pool. Shaped in the form of an oyster, the pool facility occupies a 1,500 square meter space. It is filled with 14 million liters of water, which is the capacity of about six Olympic-sized swimming pools. The temperature of the water is kept at 30 degrees Celsius (86 degrees Fahrenheit) so that it will be easy for anyone to swim or dive inside with comfort.