Sara Duterte-Carpio, the 43-year-old eldest daughter of the President of the Philippines, Rodrigo Duterte, is contesting for vice-president. Duterte-Carpio is contesting the elections on May 9, 2022, under the Lakas-CMD party – an opposition party to her dad’s. Ferdinand Marcos Jr., son of a former dictator who was deposed in 1986 is contesting as president with Duterte-Carpio as the VP. 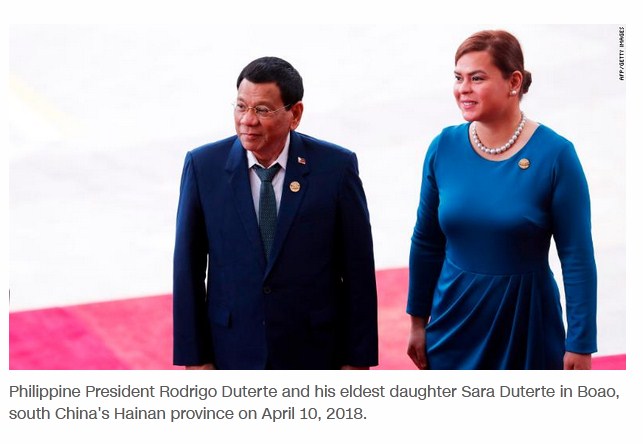 Duterte-Carpio was the mayor of Davao City – having replaced her dad – and she indicated she is not seeking re-election as the city’s mayor. She also resigned from Hugpong Ng Pagbabago, her party in Davao. There had been widespread speculations as to her candidacy for president, but she surprised everyone by coming out to contest for vice-president.

“This is to confirm that Mayor Inday Sara Duterte through her representative has filed her Certificate of Candidacy for Vice President under Lakas-CMD [party],” her spokeswoman, Mayor Christina Garcia- Frasco announced on Saturday.

Next year general elections will have people contesting for the positions of the president, vice-president, governors, mayors, and city officials. In the Philippines, the president and their vice-president do not get to the office with the same votes – they are voted separately. President Duterte, 76, has served for six years and cannot seek re-election according to the country’s constitution.

The Philippines has a population of 110 million, and President Duterte is popular for his war against drugs. The International Criminal Court is even investigating him for high-handedness in prosecuting his campaign against drugs in his country. Duterte said he will be retiring from active politics following the end of his term.

Houthis in Yemen Breach US Embassy, Detain Embassy Employees; US Reacts < Previous
7 Easy Ways to Begin a Career in Esports Next >