China Depending on Robots to Cover Worker Shortage 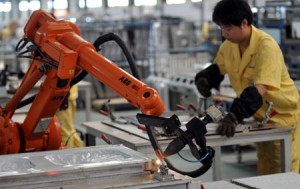 In China, there is a serious shortage of blue collar workers, which has created major challenges for businesses but also the country’s government. In an effort to find a solution, the country is hurrying to develop and deploy a wide range of robots to be used in literally thousands of factories.

For the past 30 years, migrant workers from throughout China’s countryside have worked in factories, making this country the world’s largest manufacturer. Today, many of the factories are having a difficult time hiring enough people. However, because demand for qualified workers is so great, factory owners are forced to pay up to five times the rate compared to 10 years ago.

To combat the problem, businesses and the Chinese government have started to design and install a significant number of robots. The goal is to keep factories in operation but to also create expansion opportunities while not causing a decline in employment.

One of the main reasons the country is experiencing so few blue collar workers is because of the “one child” policy but also quick expansion of the university-level educational system.

With the “one child” policy, the Chinese government only allows most couples to have one child. From 1987 through 2003, the birthrate has dropped 50%. From that time forward, the birthrate level off at a level lower per 1,000 residents compared to the US. As a result, there are many workers in China who are now in their late 20s but even so, annually the supply of workers continues to decline.

For China and other developing countries, the average age span for factory workers is between 18 and 24. Making the problem worse is the fact that the amount of time workers are staying in school continues to lengthen.

China has a very strict tradition of not allowing manual labor to interfere with education. For that reason, few college graduates will stoop to working in factories, unless they land a position in supervision, engineering, or design.

While some low-tech industries are moving away from China to places where wages are lower, many are staying. Therefore, the only viable solution to the ever-growing need of qualified workers is with robots.

Although the cost to build robots that will take over for humans is high, a large number of companies in China find this to be a more cost-efficient solution compared to paying higher wages or moving operations out of the country.