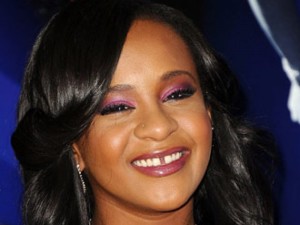 Bobbi Kristina was transferred to a facility better suited for the type of long-term care she requires. The source did not say which facility she was moved to. According to a previous report in People magazine, Bobbi Kristina’s family wanted to move her from the hospital some time earlier, but her father vetoed the decision.

Her partner, Nick Gordon, and a friend found her inside her home in her bathtub, facedown on January 31. While Bobbi Kristina referred to Gordon as her husband, a lawyer for her father Bobby Brown reports that they have never officially married. Brown turned 22 earlier this month.

According to the reports, her condition remains unchanged. Few details on her condition have been released since the January incident and her family has repeatedly said that she’s been “fighting for her life.” Bobbi Kristina’s breathing tube was removed by doctors last month and she was placed on a ventilator, indicating her need for breathing support for an extended period of time. The Brown and Houston families continue to hold out hope for Bobbi Kristina’s recovery.

The lack of information on Bobbi Kristina’s medical condition has given rise to many rumors and contradictory reports. A few days ago, it was reported that Cissy Houston was summoned from her home in New Jersey to her granddaughter’s bedside, sparking rumors that family members were being summoned to say their final goodbyes.

Bobby Brown has said little about the status of his daughter’s health, but has had his attorney release a statement on his behalf requesting the media refrain from interviewing unauthorized family members about Bobbi Kristina’s medical condition. Her mother Whitney Houston passed away in February 2012 after also being found unresponsive in a bathtub.