Archaeologists have discovered evidence of an ancient gold trade route between the southwestern part of present day Britain and Ireland that dates back to 2500 B.C. The discovery comes from efforts to identify the source of gold artifacts in Ireland’s National Museum. Those efforts revealed that the artifacts had been made from gold imported from Cornwall in Britain, thus leading to the discovery of a trade route.

The findings were published in the journal Proceedings of the Prehistoric Society by lead author Chris Standish of the University of Southampton. Standish explains that the evidence suggests that Ireland’s gold workers were making artifacts out of imported gold despite the presence of local gold deposits. Standish pontificates that Ireland would have known how to extract gold from its own reserves, but that a product from a foreign land was seen as “exotic” and therefore more coveted for production. 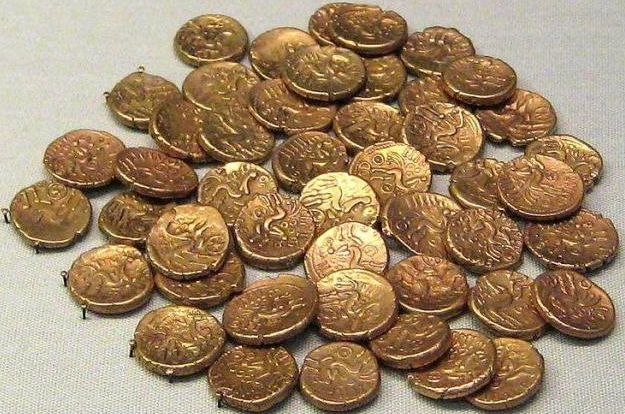 Researchers used laser ablation mass spectrometry to analyze gold samples from the National Museum of Ireland. This was done to measure isotopes of lead to compare with gold deposits in a variety of locations. Roughly 50 Bronze Age artifacts were sampled, including basket ornaments, discs, and necklaces. The conclusion is that the gold present in the artifacts originated from Cornwall, most likely as part of the trade of the tin mining industry.

The discovery of this trade route between Britain and Ireland suggests that southwest Britain experienced a gold rush during the Early Bronze Age, most likely between the 17th and 22nd centuries B.C. The trade route could have seen as much as 440 lbs of gold during that time, an amount that would be worth $7.6 million by today’s standards.