Nowadays, we are all familiar with the concept of 3D technology. There are new machines that help create full 3D objects from scratch. They have innovated the scientific and medical fields in many ways, but now, they have also caused a huge impact in the fashion world.

The 3D printers are famous for creating bladders, pieces of other machines, or even a small cup, which was the first object to ever be 3D printed by Charles “Chuck” Hull in the 1980s, according to a CNN interview. But they are now being used to create whole pieces of clothing, and hopefully one day, they do wholesale printing beyond our imagination. 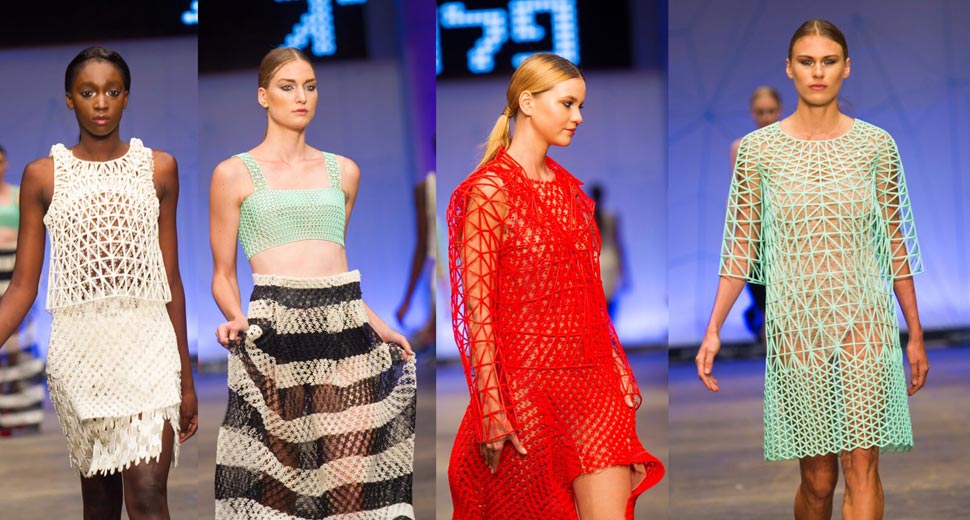 Iris van Herpen is a Dutch fashion designer who is known for pushing the boundaries in her artwork. She likes to work with particular textiles and materials or even creating completely new ones. On January of 2013, she participated in the Haute Couture Paris Fashion Week, and during her “Voltage” presentation, she showed two new innovative 3D printed textiles.

For the first dress, she worked along Materialise and architect Julia Koerner. As explained by TEDx, Iris van Herpen created a “black lacey dress that looks like a woven web over the body.” The dress looks like it was carefully handmade with a beautiful and quite interesting lace fabric, but it was completely 3D printed.

The dress is made of a whole new textile called TPU 92A-1 that comes from laser sintered plastic. It is the very first printable material that is flexible and durable enough to be worn and put in a washing machine.

The second dress was created with the collaboration of Stratasys and MIT’s Professor Neri Oxman. This dress might not be as pretty as the first one, but it is indeed extremely interesting. It consists of a cape and skirt completely covered with cone-shaped figures that look kind of like mussels.

“We could say, ‘I want the arm really flexible, but then the middle not so flexible and the end flexible again’” van Herpen explained.

By doing this, van Herpen was able to specify where she wanted flexibility and where she did not, which serves to offer a wide variety of possibilities for the 3D printing of clothing.

These innovations would not only revolutionize the fashion world but also the manufacturers.  In this case, it is not 3D printing that gets the leadership, but the 3D scanning.

In Hong Kong, there is a tailor shop that switched from the measuring tape to a 3D body scanner that can measure more than 120 points in less than 10 seconds.

Reuters explained that customers are asked to wear a “tight-fitting tank top” and get inside a changing room equipped with 14 infrared sensors. The machine asks the customer to stand in a certain spot and hold still while it takes the measures. Then, the tailor receives the entire gathered data through an app on the tablet.

Soddy Cheng, a tailor consultant who has been making suits for decades, said that the body scanner has replaced the first and main step in making a suit.

“The tailors usually don’t meet the customers. But this 3D technology can help them visualize the customers’ body shape,” he said, as reported by Reuters.

After all, data is stored on the company’s software; it is used to create a 3D body model that helps and facilitates to creation of a digital pattern. This body model provides the tailor with information that is not usually taken with the old measuring method. Tailors can know precisely the customer’s body shape and their particular characteristics.

In the end, the digital pattern is cut with a laser and hand-assembled, producing perfectly fitting clothing for each particular customer.

Joe Santos, from ‘The Rockford Files’, dies at 84 < Previous
Having a good heart condition also results in a healthy brain, study finds Next >