Scientists have found an unknown species of ancient beetles well-preserved in dinosaur poop. The 230-million-year-old beetles were found intact in dinosaur feces and provide insights into the diet of the giant creatures in ancient times. 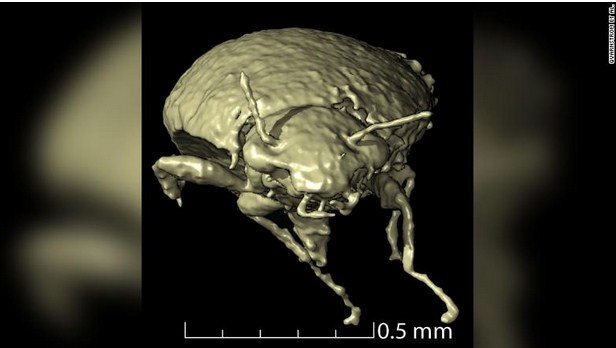 The discovery was published in the journal Current Biology. The preserved beetles have been named Triamyxa coprolitic since the long-necked Silesaurus opolensis dinosaur which consumed and pooped the beetles that lived in the Triassic period lasted from 252 to 201 million years ago. The beetles were found in fossilized feces, known as coprolites, using micro CT scanning. Scientists believe the beetles may have been part of the dinosaur’s daily diet alongside green algae which thrived in aquatic habitats.

The undigested beetles have so preserved with all their features intact that scientists were able to model the insects using three-dimensional forms.

“I was really amazed to see how well-preserved the beetles were when you modeled them up on the screen, it was like they were looking right at you,” said the study’s first author Martin Qvarnström, a paleontologist and postdoctoral fellow at Uppsala University, Sweden. “This is facilitated by coprolites’ calcium phosphatic composition. This together with early mineralization by bacteria likely helped to preserve these delicate fossils.”

Given that the insect fossils were preserved in three-dimensional forms in the dinosaur’s poop, scientists said the discovery is very important since preservation in three dimensions was nearly impossible in ancient times. This was explained by the director and chief curator of the PRI Center for Paleontology at the University of Illinois at Urbana-Champaign, Sam Heads.

The team of researchers that found the beetle species in dinosaur feces in Poland said they were sure the Silensaurus opolensis secreted the poop containing the beetles because of its size and diet and the fact that it thrived in ancient Poland about 230 million years ago at the Triassic era. The long-snouted dinosaur measured 2 meters (6.6 feet) long and weighed about 15 kg (33.1 pounds), and it fed mainly on a combination of plants and insects.

“Silesaurus possessed a beak at the tip of its jaws that could have been used to root in the litter and perhaps peck insects off the ground, somewhat like modern birds,” Qvarnström said. “Although Silesaurus appears to have ingested numerous individuals of Triamyxa coprolitic, the beetle was likely too small to have been the only targeted prey.”

The researchers concluded that Silesaurus must have been omnivorous given the mixture of many intact beetles and other insects as well as green algae found in its poop. However, the scientists said the hard exoskeletons of the Triamyxa may have made it impossible for the dinosaur to swallow the beetle whole and digest it with ease.

Another 182 Human Bodies Found In another Residential School in Canada < Previous
No Time to Work out? It is High Time You Stop Making Excuses Next >