The Somali National News Agency announced that 20 people lost their lives and 30 others were injured when a car bomb detonated in Mogadishu, Somalia’s capital on Friday evening. The car bomb went off at a popular restaurant known as Luul Yemeny at around 8 pm and heavy gunfire was reported after the blast. 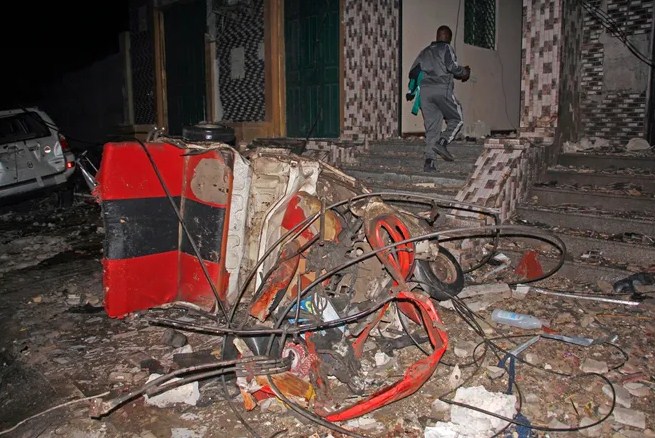 Senior police officer Captain Aden Osman stated that nearby buildings also collapsed after the massive blast and people also died in the buildings after being trapped. Injured people were rushed off to local hospitals by the Aamin Ambulance services as security forces took over the scene to cordon off further attacks.

Eyewitnesses reported that the bomb blast shook the ground heavily and diners were caught off guard while people in surrounding homes were rattled. People said plumes of heavy smoke and dust filled the city’s atmosphere after the explosion and local police are still working to evacuate people and interview witnesses.

The militant group Al-Shabaab claimed responsibility for the blast and stated that more are coming. The militant group affiliated with Al-Qaeda also attacked the Luul Yemeny restaurant last year and there were casualties reported. The insurgency group has been known to carry out bombing attacks in Mogadishu for many years but was pushed back to Somali and AU troops in 2011.

A large protest was planned by opposition parties for Saturday in Mogadishu over the country’s delay in announcing a timeline for another presidential election. Somalia’s President Abdullahi Farmajo’s tenure is reported to have expired on February 8, but the government refused to schedule a date for another election. The planned protests for Saturday were however called off after heavy security forces took over the city.

In February, a car laden with bombs denoted close to the palatial residence of the president but no one was hurt in the blast. Police spokesman Sadiq Ali Adan also confirmed the Friday car bombing and noted that it was orchestrated by the Al-Shabaab extremist group.