What is Custom LVDT?

Linear Variable Differential Transformers (LVDTs) is one of the conventional primary sensing tools for positioning. LVDTs are still used as position sensors in harsh conditions such as industrial plants, particle accelerators, nuclear power plants, etc. because of their low sensitivity towards heat, and their contactless sensing. Also, depending on the applications, LVDTs are conveniently customizable, these are known as custom LVDTs. 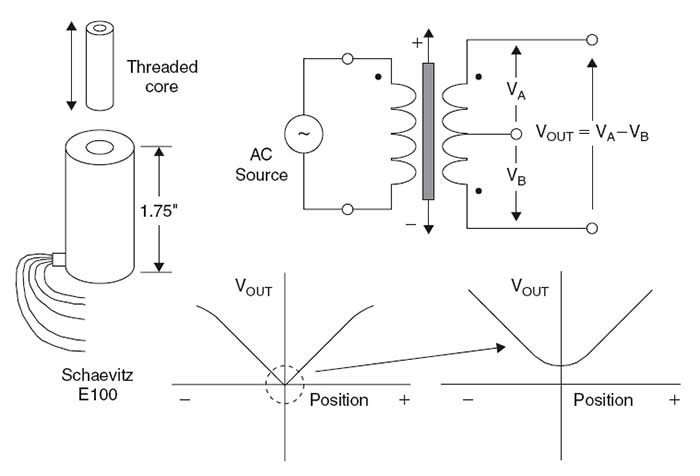 The primary winding is energized with high-frequency AC voltages. The motion to be indicated is connected with the core actuator. As the core inside the former moves, the magnetic paths between the primary and secondaries change, thus giving secondary outputs proportional to the movement.

There will be radial and longitudinal magnetic forces on the core all of the time. It is possible to view these magnetic forces as magnetic springs that attempt to shift the center to its core location. In certain applications, this could be important.

What is meant by custom LVDTs?

LVDTs are used for various ranges of applications in manufacturing industries, ATMs, moisture testing, as well as in automation applications. According to the application requirements, the LVDTs may vary in design. The installation technique used, size, and measurement range are some of them. LVDT manufacturers customize the LVDT as per the client’s requirements; these LVDTs are generally called custom LVDTs.

LVDTs are customized to make them suitable for different applications. So, depending on the electrical property and application specifications, custom LVDTs are available in various types.

These custom LVDTs are controlled by low friction assemblies, which avoid misalignments. Hence captive armature LVDTs are used for applications that require a long lifetime.

Unguided armature custom LVDTs offer a no-wear design that provides infinite resolution. In this type of custom LVDT, special protection is required for the linear transducer, since it is connected loosely to the measurands.

These types of custom LVDTs are used where measurements need be taken from sluggish medium and slow-moving applications. To drive the armature constantly to its maximum possible extension, force extended armatures use internal spring mechanisms, pneumatic power, or electric motors.

Usually, these are miniature LVDTs that cannot accommodate built-in signal conditioners. They are mostly used in applications such as robotics, medical uses, and optical components.

DC LVDTs come with embedded signal conditioners, so they are comparatively larger and used in industrial applications.

These are used for high-resolution precision applications in tight places. Spring-loaded LVDTs are used for civil engineering, robotics, and optical components.

One of the best benefits of custom LVDTs is customizable connection methods. In our market, you can find different connection methods suitable for connecting LVDTs with steam turbines, threaded connections as per client requirements, mounting feet for preferred applications, and extra holdings to resist vibration.

Such LVDTs are constructed with special radiation-resistant materials that operate continuously without decay. They are used to measure the position of the control rod in the nuclear plant, submarines, missile fins, etc.

Phase-sensitive demodulator chips such as the AD598 are available in the market. To suit unique application requirements, these chips are extremely scalable and flexible to use. Such circuits offer a wide range of input and output voltage, and frequencies, which enable them to be used in a variety of applications.

LVDTs have a wide range of applications, from simple displacement measurements to jet engine control near exhaust gases, and material thickness calculations of roll positions in hot-slab steel mills. LVDTs can also be used to measure force and pressure after some mechanical modifications. Other applications of LVDTs are listed below:

A major benefit of LVDT is that there is no direct interaction between the core and the coil form, and thus there will be no friction or wear. Other advantages are listed below:

LVDTs will continue as significant transducers in future automation and robotics for measuring displacement and as a part of the control circuits. Since LVDTs have a long lifetime and shock resistance, overall they are very reliable transducers.