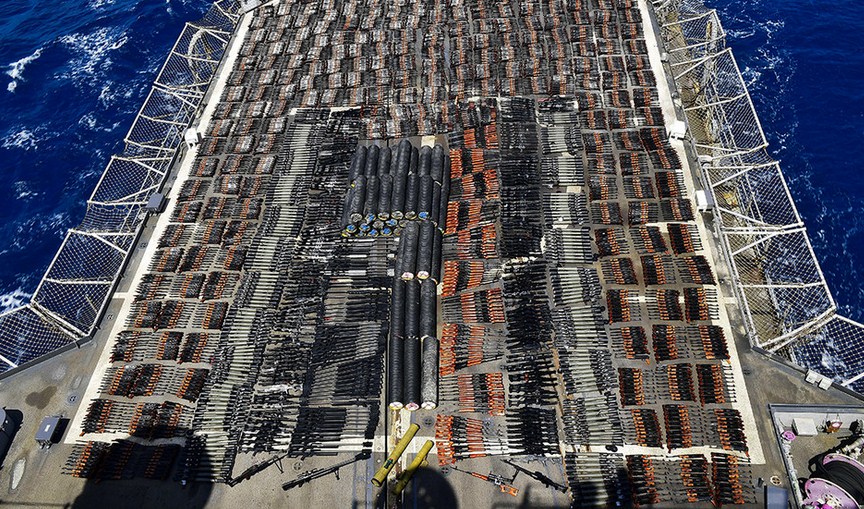 The weapon shipment was found by the guided-missile cruiser USS Monterey in what the authorities say is a stateless dhow. The US Navy had been scouring the Arabian Sea off Oman and Pakistan for a number of days before they found the ship laden with a heavy cache of weapons. According to the US Navy fleet based in Bahrain, the shipment has been seized and the crew of the offending ship released after feeding them.

The authorities said about 3,000 Chinese Type 56 assault rifles which are another version of the Russian Kalashnikov. A defense official said the government determined that the shipment originated from Iran after reviewing crucial documents found aboard and interviewing the crew. The official said the seizure is similar to others that had been made earlier along the same route since the civil war broke out in Yemen in 2014.

Defense officials said it is apparent that Iran is still arming Houthi rebels even though the United Nations placed an arms embargo on the Islamic Republic. Tehran would not respond to queries about the shipment and seizures, but Iran has always denied arming rebels in the past. The United Nations however does not believe Tehran, given that ballistic missiles and drones used by Houthis in the Yemeni war have been traced back to Iran many times.

“The unique blend of material recovered by the USS Monterey appears to be consistent with the material from the previous interdiction, which has been linked to Iran,” said Tim Michetti, an investigative researcher who studies the illicit weapon trade and had seen past seizures.

The Armed Conflict Location and Event Project reported that more than 130,000 people have been killed since the Yemeni war started in 2014, and this figure includes 13,000 civilians destroyed in the war. Saudi Arabia and the UAE among other countries back the government of Yemen while Iran and Russia support Houthi rebels.