UW under heat over Tryouts poster

The University of Washington is being criticized and labeled as segmentary after its cheerleading department published a graphic advise for upcoming cheerleaders.

The cheer and dance ‘Tryout Look’ posted a do’s and dont’s posters on their cheerleading squad segments. Social media blasted after watching the poster that suggests future cheerleaders to maintain physically fit.

Critics of the poster assure that cheerleaders have work hard throughout the years to stabilize the image of cheerleading as a sport while the recently published poster seems to care just for the shallow image.

University of Washington’s cheerleading squad posted a graphic to answer the most commonly asked questions about cheerleading and dance tryouts, but the public didn’t receive it quite as well.

A white blonde girl can be seen in the center of the poster posted by UW, wearing a black sports bra and some Nike black shorts. Surrounded by a list of do’s and dont’s than go, literally, from head to toe.

In the Tryout look, the UW cheerleading squad suggested girls to have a ‘bronze and be achy glow’, wear fake eyelashes, use a “girl about town” lipstick and use a flattering eye shadow.

The hair must be down, curled or straight and have enough volume but off the face, reads the graphic. It is a “Hair don’t” to use a ponytail or trendy colors, as for the makeup interested girls in joining the team should avoid dark eyes, too much makeup and colors.

The graphic continues to describe the “Body do’s” a tryout girl should have to be a part of the UW team. Physically fit and an athletic physique is the first bullet point in the graphic and a natural or spray tan while wearing nude or no fingernail polish.

In the “body don’ts” description tryout girls should avoid jewelry of any kind, visible tattoos and distracting finger nail polish.

The UW cheerleading team proceeded to explain the “Attire Do’s” in which figure a solid black sports bra, mid rise black shorts and cheer shoes. While in the “Dont’s” sections girls can’t wear colors other than solid black, tops that cover the “midriff”, high waisted shorts or running shoes.

The publication went viral after it published on Monday 25 Facebook and Twitter enthusiasts stated that the cheer squad was segregating and neglecting a wide amount of girls only for their physique. 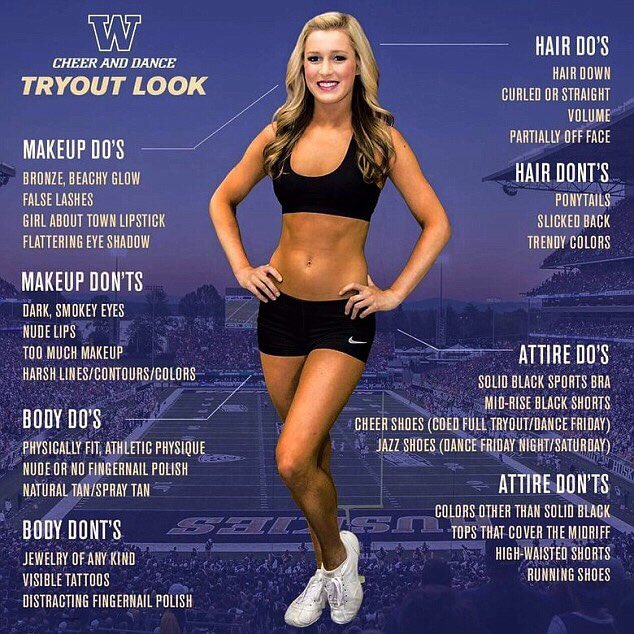 After the social media exploded with messages against the poster, the graphic was deleted from the website.

UW department official told People Magazine “ The graphic was removed immediately, after a UW athletic department official saw it and determined that some of the details and descriptions provided were inconsistent with the values of the UW spirit program and department of athletics” Read the statement.