As homeowners, we’ve heard on numerous occasions that we should switch to solar power. Much of the argument is centered around sustainability and the environmental benefits solar power has to offer, which are impressive. Going solar is a big and somewhat costly decision. While many are discouraged by the initial costs involved, there are numerous short and long term gains to be made by making the switch. 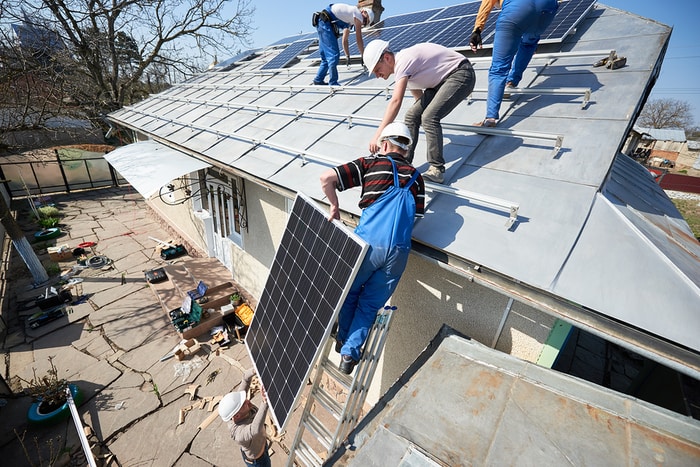 Countless studies have shown that homes with solar panels consistently sell for more than their non-solar counterparts. Zillow research states that that solar homes sell for around four percent more on average. Installing solar unit costs a bit up front, but in the eyes of the prospective buyer, it basically guarantees both short and long term energy savings. In fact, over 80 percent of people on the market for a new home attest that energy-efficient features are high on the list of what they look for.

Electricity costs have risen approximately three percent each year for the past ten years, and the trend doesn’t look to be slowing down any time soon. Investing in solar protects you from these rising prices by producing your energy independently and leaving you no longer at the mercy of inflation. Your electricity has a much shorter distance to travel from the source to your home, making it both domestic and efficient. Not only can switching to solar save you exponentially on utilities, but there are also many government grants out there that will essentially give you money for going green.

The term “solar power” is universally associated with green energy and sustainability, and rightfully so. Solar energy doesn’t pollute the atmosphere, releases zero greenhouse gasses, and uses almost no outside resources. Since solar power safely produces its own energy, installing it is a great way to help bring about a sustainable future. One of the most important and least talked about the environmental benefits of solar power is that it pertains to water. Solar power neither pollutes local water supplies nor requires any water to operate the way most power plants do.

Get Breaks On Your Taxes

We all love a good tax write off. The Solar Tax Credit was originally created by the EPA in 2005, and designed to last just through 2007. However, due to its efficacy as a powerful incentive, it has been extended by Congress for over a decade now. Through the Federal Solar Tax Credit (which can also be found under the name Investment Tax Credit), you’ll be able to deduct 30 percent of your installation costs from your federal taxes. Anyone who owns a solar energy system is eligible, whether residential or commercial. It’s a one-time tax credit, but there are rollover allowances if you aren’t able to claim it all in one year.

The decision to go solar is a big one and shouldn’t be taken lightly, but the benefits are unmistakable.

Gabriel Patterson, Winnipeg Fitness Trainer and Nutrition Expert, Announces Plans for Exclusive Wellness Retreat < Previous
5 Skills that You Can Hone from the Comfort of Your Own Home Next >