The largest toad in the world may possibly have been caught in Australia. A monster cane toad weighing 2.7kg (5.9 pounds) and named “Toadzilla” was caught by Kylee Gray, a ranger at the Conway National Park in Queensland, Australia last week. Gray and her team had stopped in a wild rainforest to let a snake slither past before they found the giant toad on the ground. 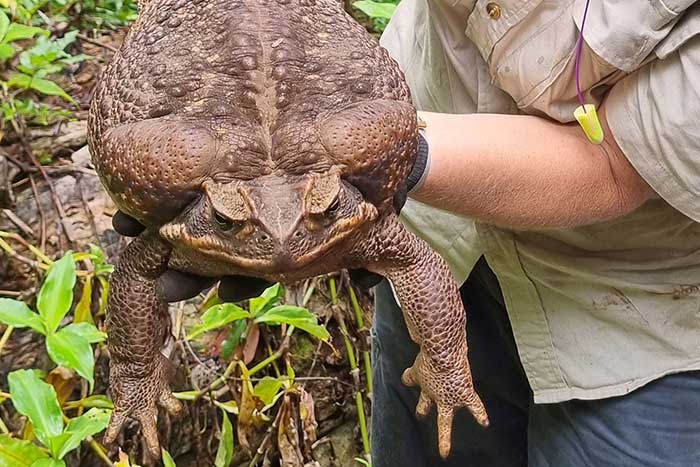 According to Queensland’s Department of Environment and Science, Gray’s team wanted to name the giant toad “Connie” but changed her mind to “Toadzilla” when she recalled the famed legend of Godzilla in Japan. “I reached down and grabbed the cane toad and couldn’t believe how big and heavy it was,” she said. “We dubbed it Toadzilla, and quickly put it into a container so we could remove it from the wild.”

The Guinness World Record recorded that the largest cane toad – before the discovery of Toadzilla – was Prinsen, a pet toad discovered in Sweden in 1991 and weighing 2.65kg (5.13 pounds). It is now believed that Toadzilla may possibly be the largest monster toad in the world at its measured weight of 5.9 pounds. Cane toads were introduced to Australia in 1935 to control the growing population of cane beetle and other invasive insects.

But the cane toads failed to control insect populations, but rather increased in numbers themselves and were deemed invasive as a result. National Geographic said the monster toads can live up to 15 years and instead of feeding mainly on beetles and other insects, they have grown to eat reptiles, birds, and other small mammals. Gray removed Toadzilla because it could cause environmental damage by eating up anything on its path.

After studying Toadzilla briefly, it was “euthanized due to the environmental damage they cause” and then put in the Queensland Museum for further examination. “We’re pleased to have removed her from the national park,” Gray said. “They are opportunists.” The milky poison secreted on the skin of the toad when threatened can be fatal to animals such as dogs that ingest it.

“Eating a cane toad will result in the toxin absorbing much quicker than just licking, so if your dog has bitten or consumed a cane toad, it is essential that you take them to a vet immediately,” veterinary experts said.