The process of the Nobel Committees to select the Nobel Laureates begun this year and this week, three out of the five prizes were awarded. The selection process includes a period where the Nobel Committee receives nominations, with that information a short list of strong candidates is prepared and reviewed several times.

The winners must be voted by the majority of the Selection Committees. This year, there were almost 400 candidates for the Nobel Peace Prize (228 individuals and 148 organizations), which is the highest number of candidates in the history of the Prize.

A little history about the Nobel

The international award, inspired by Alfred Nobel, was first given in 1901 to prominent representatives of Physics, Chemistry, Medicine, Literature and Peace.  Different Royal Academies and specialized institutions take the decision of The person who gets the Nobel Prize.

Alfred Nobel stated in his will that the Prize should be awarded to “those who, during the preceding year, shall have conferred the greatest benefit on mankind.”

The award frequently caused controversies and criticisms, whether for being given to controversial people or for increasing focus on particular conflicts or delicate issues.

This year may be one of those opportunities, regarding the Nobel Peace Prize, that according to Nobel’s will should be awarded to someone who worked for “fraternity between nations, for the abolition or reduction of standing armies and for the holding and promotion of peace congresses.”

The Colombian President received the Nobel Peace Prize for his participation in the peace-making accord he pushed in his country. The Norwegian Nobel Committee decided to award him considering his commitment to keeping trying to bring peace to the region and Olav Njolstad announced him through a telephone interview that the Committee published on their official website.

“The award should also be seen as a tribute to the Colombian people who, despite great hardships and abuses, have not given up hope of a just peace, and to all the parties who have contributed to the peace process,” said the statement of the Committee.

Santos, who is the Colombian president since 2010, is one of the founders of the largest political party in Colombia and even when initially stated that we would keep the offensive strategy against the guerrilla, eventually switched his policy towards peace negotiations with the armed groups.

To some, this award could save the peace process and may make a difference in Colombia’s perspective on the long and violent war. Even when the peace deal was rejected, the referendum suffered a significant absence of voters; that may end up influenced by the Nobel Prize news.

About the other Nobel laureates

Three prominent researchers received the Nobel Prize in Physics: David Thouless from the University of Washington, Duncan Haldane from Princeton University and Michael Kosterlitz from Brown.

They received the award for their investigation in nanotechnology and microcellular discoveries. Using their understanding of chemistry, were able to adapt small cells to perform machine-alike operations.

The Nobel Prize in Medicine was given to Yoshinori Ohsumi from the Tokyo Institute of Technology, as the result of his work on cell recycling and excretions’ process in the human body.

On Monday the Committee will announce the laureate in Economic Sciences, and the Literature Prize will come later in the year.

Nobels in the world: Geography and demography

This year half of the recipients of the prize are British, making the United Kingdom the second country with most Nobel prize winners in their history, with 98 Laureates. However, United States is at the top of the list with 258 recipients of the award.

Germany is also in the race with 80 Nobel laureates. France and Russia are on the list as well, with 54 and 31 laurates respectively. Japan competes with Sweden with 29 and 30 awards while Austria and the Netherlands have 19 laureates.

This year the average age of the winners is 72. The youngest Laurate is 65 years old. To some, this indicates that to win a Nobel Prize you must be old, but there is more to it.

The Nobel Prize website published graphic data about the age of Laureates through the history and in most categories the trend is between 50 and 75. 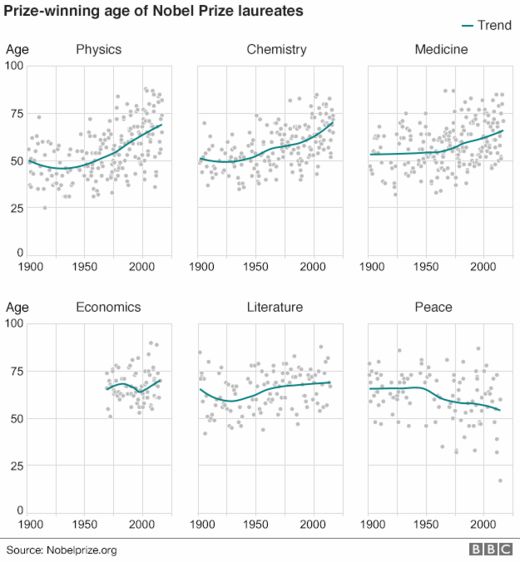 Regarding gender, men are the winners. The male to female ratio regarding the laureates is directly linked with the way the scientific populations has been structured in the past, even when the first time a woman won the prize was in 1903: Marie Curie, who won only as the result of her husband’s claim. Female representation in Nobel Prizes is minimal, and this year there are no female laureates yet. 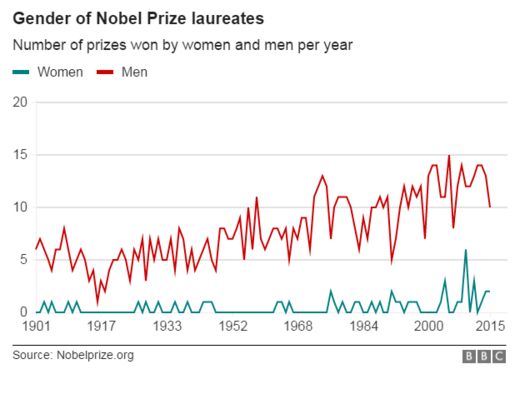 What do they win?

The prestige Nobel laureates get is probably the highest recognition in the respective fields, but also, winners of Nobel prizes receive an 18-karat gold medal and almost $1 million.

In the case of multiple laureates, such as the Physics and Chemistry Prizes, the prize money is divided according to the amount of effort of each winner in the product that made them receive the award.