Home » Headlines » Entertainment » The daughter of Chrissy Teigen and John Legend is here!

The daughter of Chrissy Teigen and John Legend is here!

Chrissy Teigen and John Legend announced on Sunday morning the birth of their daughter, Luna Simone Stephens, through the Instagram account of the 30-year-old supermodel. The couple had previously commented about their issues to conceive. However, last year they underwent in vitro fertilization.

The newborn baby weighs 6 lb 11 oz, according to an Instagram picture. First time Teigen announced she was pregnant was in December, when she published a Vogue cover where she appeared. She said that minutes after the photoshoot, she and the singer of “All of me” learned they were having a baby girl.

According to E! News, the couple organized two baby showers in March, one in New York and one in Los Angeles. One of the ceremonies was hosted by Kim Kardashian and her family. Sources reported that the place was full of desserts colored in pink and white, featuring images of John Legend when he was a child.

In February, Legend joked in an interview at 92.3 FM radio, saying that Chrissy had a lot of pressure about the birth of the baby girl because everyone would say the baby is cute, when every newborn baby “is not that cute”. 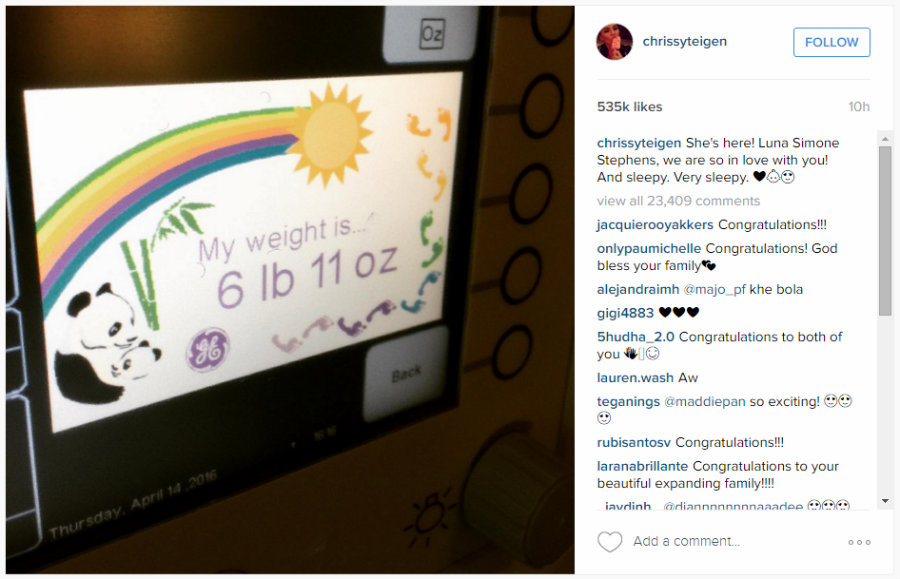 However, he added more seriously that they were just focused on the health of Luna Simone Stephens. On the other hand, Teigen said to E! News, that the couple is not worried about their busy schedules since they like a “little chaos in life”

Luna Simone Stephens is the baby of a very energetic couple

Teigen said in an interview with E! that she had more energy now than before she was pregnant. She also added that the couple has decided to get the baby into traveling really young, adding that they are going to be the typical couple with a baby on a plane.

According to an interview published on March in Self magazine, the supermodel has always pictured everyone in his family around the table, for the holidays and together once a week. “It’ll be heartbreaking if it doesn’t end up happening”, she added.

When she published her last picture showing the weight of Luna Simone Stephens, she received more than 411K likes and nearly 20 thousand comments of congratulations and great wishes for the new family.