Scientists find signs of pollution in the Arctic Ocean

On Tuesday, a team of international scientists found two blocks of polystyrene floating down waters near the Arctic Ocean. This event has turned into a huge concern for the scientific community after the dangers that represent not only the pollution the humanity is generating in Earth but also the global warm that’s slowly melting the ice glaciers.

The plastic wastes were found just 1.609 kilometers from the North Pole by US, Norway, and Hong Kong scientists, led by the marine biologist Tim Gordon of Exeter University, in the UK.

The group told media how impressed they were when they found two large pieces of sizable plastic chunk on the edge of ice flows, between 77 degrees and 80 degrees north. This place is located in the middle of the international waters of the central Arctic Ocean, where the sea ice previously provided a barrier against all garbage moving along the sea tide, blocking the entrance to the North Pole.

“Finding pieces of rubbish like this is a worrying sign that melting ice may be allowing high levels of pollution to drift into these areas. This is potentially very dangerous for the Arctic’s wildlife,” said the marine biologist Tim Gordon of Exeter University.

The finding of these chunks of plastic confirms how far pollution has spread, even to reach an area where a big part of it was completely frozen on last year. Scientists also informed they were the first group to enter into this Central Arctic Ocean zone, further than any other group before, after how dramatically the ice has melted these latest years. The group estimates that 40 percent of Central Arctic Ocean is now navigable in summer due to how much the climate change has affected.

Scientists told both pieces of plastic are just one part of the huge problematic: they also assured the existence of “microplastics,” which are consumed by wildlife and then passed up through all the food chain.

They were able to find these little wastes thanks to own nets composed of little holes. They holes did not even measure a millimeter in diameter. However, it was just the enough size to let the water pass through and trap the microscopic signs of pollution.

The findings are now being analyzed in the scientists’ laboratory to identify the levels of contamination in the Central Arctic Ocean and closest zones and to also evaluate how this is affecting the animals that live in the area.

“The Arctic Ocean’s wildlife used to be protected by a layer of sea ice all year round. Now that is melting away, this environment will be exposed to commercial fishing, shipping and industry for the first time in history,” said Gordon. “We need to seriously consider how best to protect the Arctic’s animals from these new threats. By doing so, we will give them a fighting chance of adapting and responding to their rapidly-changing habitat.” 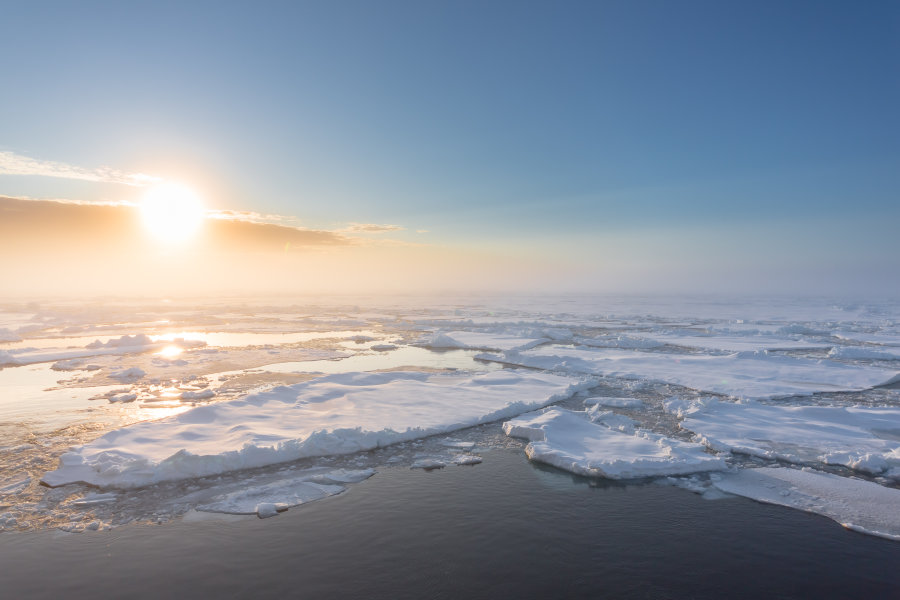 How pollution is affecting the Arctic Ocean and the world

Studies estimate that there are already 5 trillion pieces of plastic chunks floating in the world’s oceans and that the number is increasing so fast, one day it will outweigh fish. This number of plastic in the sea can also form a permanent layer in the fossil record.

Around 300 million tons of plastic are created each year, nearly the same number of humans that inhabit the world. According to Dr. Ceri Lewis – scientific adviser of the expedition based at the University of Exeter – 50 percent of that amount of plastic is used and then thrown away without being recycled.

Worldwide rivers drag garbage and plastic pollution into the Arctic Ocean, which ends completely trapped into the ice. Today the glaciers are melting, bringing down those same plastic chunks that were first entirely frozen.

Lewis believes the Arctic is a hot spot of microplastics accumulation due to the number of rivers that empty into the Arctic basin, and that fishes consume these microplastics than later are commercialized around the world.

The 40 percent of the ice melted in summer opens many gates to illegal fisherman, provoking an enormous damage to wildlife that never faced such a threat before. As some projections indicate, by the end of 2050, the Arctic Ocean will be completely out of ice, allowing not only illegal animal commercialization but also human exploitation.

“It is critical that we establish baseline natural recordings in this newly exposed oceanic environment,” said the expert in bioacoustics and noise pollution, Professor Steve Simpson at Exeter University. “These recordings will allow us to understand how human activities are changing the soundscape of the summer Arctic, and assess the success of future noise management in this unique acoustic world.”

The Arctic ecosystem will face several consequences in the following years if humanity doesn’t find a way to stop global pollution. Heather Bauscher, a wildlife biologist, said that researchers of high quality and the development of sound management strategies “are necessary to protect the Arctic’s wildlife,” which is facing a very “dramatic change.”