A roaming herd of elephants is currently traveling across China, generating mixed reactions from people all over the world. The giant creatures reportedly left the Xishuangbanna National Nature Reserve in southwest Yunnan at China’s border with Myanmar and Laos in March 2020 and traveled over 300 miles to reach where they are today in Kunming. 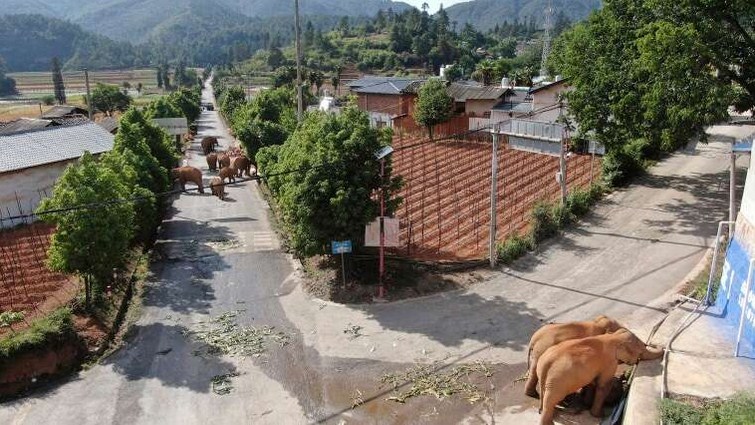 A local citizen, Adam Chang, was employed by the local authorities to deliver corn and pineapples to the wandering elephants, and he reported that the animals were amazing and “had a holy aura around them.”

However, despite the fact that local citizens are amazed at seeing the animals crossing their streets and drinking from their irrigation ditches, others complain that the animals destroyed their farmlands. While the largest animals on land navigate villages, towns, and cities in the daylights, they retire to nearby woods in the night to sleep. They also always take a nap during the day before proceeding slowly again.

Police authorities are able to track the passage of the elephants with drones and surveillance from local citizens. Officials said a calf was born in the herd in November 2020, and two elephants wandered off from the rest in April 2021.

“Elephants are holy animals that can bring fortune and peace in Chinese culture, so we are very happy the elephants came,” said Jason Cao, owner of a mining company in Yunnan hired by the government to provide food for the wandering animals.

Wildlife experts are not exactly sure of the reasons behind the elephants’ migration, but a zoologist at the University of Rwanda, Tammie Matzon, said elephants are known to travel long distances when their habitat is threatened. He said some are driven to longer distances to reach better habitats where food is readily available and to also avoid competition for scarce resources.

Given that the population of elephants in Yunnan grew from 180 in the 1980s to more than 300 in 2021, conservationists said the elephants might be traveling to search for new habitats. Some experts also said deforestation may be a problem since the rate of deforestation in Xishuangbanna has increased to about 4.1 square miles in 2021.

Raman Sukumar, a professor of ecology at the Indian Institute of Science in Bengaluru, India, said the long-distance traveled by the elephants could take a heavy toll on their health and that their stress levels may heighten since they are encountering unknown terrains along their path, terrains largely occupied by humans.