A team of researchers from the University of Colorado at Boulder has photographed invisible gaseous contaminants evaporating into the air after flushing the toilet. Using high-powered lasers, the scientists illuminated toilets spewing invisible aerosol plumes into the air each time the toilet is flushed. 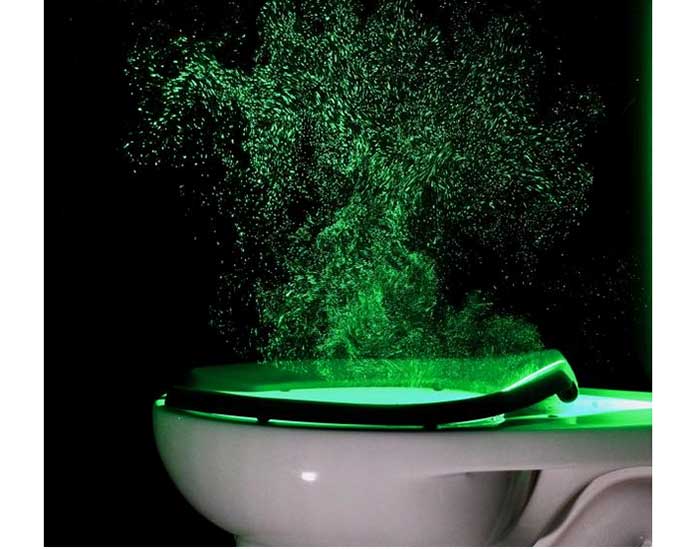 Led by Professor John Crimaldi, a professor of civil, environmental, and architectural engineering, the research team found that toxic germs are released into indoor environments when toilets are flushed. They stated that the invisible microbes shot into the air after flushing the loo constitute a health hazard for people in the room and the entire building.

It is the first time researchers have used high-powered bright-green lasers and cameras to record how aerosol plumes are ejected upwards in toilets. From images and videos of the experiments, particles of germs in airborne droplets rise at speeds of 6.6 feet per second to get to 4.9 feet above the toilet in 8 seconds. The large droplets settle on surfaces and the tiny ones remain suspended in the air for several minutes.

Given that the virus that causes COVID-19 has been found in human waste, the particles rising into the air from flushed toilets also contain bacteria that cause E. coli and C. difficile. The gaseous microbes from the toilet also contain noroviruses and adenoviruses, health experts said. The researchers disclosed that the airborne organisms in the toilet can still remain in the toilet bowl after using and flushing the bowl several times, increasing the risks of exposure to diseases.

“People have known toilets emit aerosols, but they haven’t been able to see them,” Crimaldi said. “We show this thing is a much more energetic and rapidly spreading plume than even the people who knew about this understanding. If it’s something you can’t see, it’s easy to pretend it doesn’t exist. By making dramatic visual images of this process, our study can play an important role in public health messaging.”

The scientists used two powerful lasers and two high-resolution cameras for the study. One of the lasers revealed the locations of the airborne plumes after the toilet was flushed, and the second laser sent pulses of light to measure the speed and direction of the plumes as they evaporated upward following a flush. The cameras took images and videos of the entire process for computer analysis.

Crimaldi said the gaseous particles float to the ceiling of the toilet space before resting on the toilet walls. But in many cases, they also spread outside the toilet into living rooms or bedrooms and any living space closest to the loo. The research team discovered that since tinier particles remain floating in the air for longer periods of time, people can inhale them and then experience health implications from the germs they contain.

The study was published in the journal Scientific Reports.

Top Male Celebrities Are Wearing Pearls, You Should Include Them In Your Wardrobe < Previous
Walmart to Launch “Buy Now, Pay Later” Financing for Customers Next >
Social Connection
Latest News